Delhi Capitals beat Royal Challengers Bangalore by 16 runs and thus qualified for the playoff for the first time since 2012 with two more game to go. This win takes them to 16 points, level on points with Chennai Super Kings, but with a superior Net Run Rate they move to top of the points table.

ifties from skipper Shreyas Iyer and Shikhar Dhawan set base for Delhi Capitals 187/5 against Royal Challengers Bangalore in Match 46 of IPL 2019 at the Feroz Shah Kotla, Delhi on Sunday, which was defended well by the bowlers, thus securing a playoff berth for the first time since 2012- with a 16-run win over Virat Kohli s team.

Iyer 52, Dhawan s 50 and Sherfane Rutherford s 28* off 13 balls was supported well by bowlers led by Amit Mishra (2/29) and Kagiso Rabada (2/30), while RCB were caught by the sluggish Kotla track despite having a good start to the chase.

However, DC made a strong comeback when they reduced RCB from 103/1 to 111/5 4 wickets for just eight runs. De Villiers was the first to go in the mini collpase when Axar took a stunner at deep midwicket, perilously close to the advertising triangle, off Rutherford in the 12 over. In the next over bowled by Amit Mishra, Heinrich Klassen fell attempting a scoop, caught well by Rishabh Pant and the in the same over, Dube, on 24 off 16 balls was foxed by a googly, skying at point, where Dhawan completed a good catch. SCORECARD: DC vs RCB

From this point onwards the sluggish nature of the Kotla track made strok-making tough for RCB batters. Gurkeerat Singh clobbered 16 runs of one Ishant Sharma over, but his 19-ball 27-run knock came to a screeching halt when Pant completed a superb one-handed diving catch behind the stumps.

Marcus Stoinis continued to hold the fort with an unbeaten 32 off 24 but Rabada and Ishant Sharma finished their spells well to restrict RCB to 171/7. 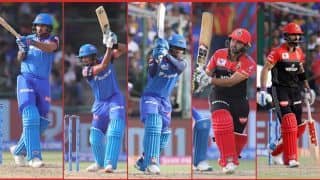