With this win, RR are at eight points level with Royal Challengers Bangalore and KKR. But, RR's net run-rate of -0.39 is superior to RCB's -0.68, who now find themselves back at the bottom of the pile.

Rajasthan Royals moved themselves to seventh position in the points tally with their fourth win in 11 matches with a three-wicket win over Kolkata Knight Riders in Match 43 of IPL 2019 at the Eden Gardens, Kolkata on Thursday.

RR chased down a target of 176, riding on young 17-year-old Riyan Parag’s level-headed knock of 47 off 31 balls, before Jofra Archer finished off the game with a couple of lusty blows, finishing with 27 off 12 balls.

RR were revived from 98/5 in 12.3 overs by Parag, who first combined with Shreyas Gopal (18 off nine balls) for a stand of 25 runs and then with Jofra Archer for a stand of 43 runs off just 21 balls before departing hit wicket in the 19th over.

Earlier, Despite Rajasthan Royals putting in an inspired spell of bowling courtesy their two bowling changes in Varun Aaron and debutant Oshane Thomas KKR were buoyed by a 50-ball unbeaten 97-run knock from skipper Karthik who led the hosts to 175/6.

Karthik rebuild the innings coming in at 31/2 and finished with a big flurry taking just 15 balls to race from 50 to 97 with the help of seven fours and nine sixes. He took 16 runs off Archer s final over the 19th of the innings and then added 18 runs of the 20th, bowled by Unadkat 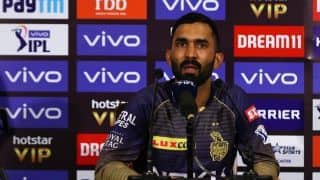 A lot of will boil down to how KKR trust me as a leader: Dinesh Karthik