Kolkata Knight Riders jumped from seventh to fifth with a dominant seven-wicket win over Kings XI Punjab in Match 52 of IPL 2019 at the PCA IS Bindra Stadium, Mohali on Friday and kept their hopes of a playoff berth alive with one more match remaining for them in the league stages.

However, with their eighth loss in 13 matches, Ravichandran Ashwin-led KXIP are virtually out of the race for the playoff, slumping to seventh position.

Shubman Gill anchored the chase for KKR with a mature 65 not out off 49 balls after Chris Lynn blazed his way to 46 in just 33 balls. Robin Uthappa played a handy knock of 22 off 14 balls, while big-hitting Andre Russell managed only 14 off 14, skipper Dinesh Karthik provided the finishing touches with a nine-ball unbeaten 21-run knock.

For KXIP, they are virtually out of the race for the playoff with their eighth loss in 13 matches and would rue lack of intensity in the bowling department, despite posting an above par total of 183/5 after being put in to the bat. Sam Curran started with the bat with a whirlwind 55 not out of just 24 balls while Nicolas Pooran made 48 off just 27 balls. With the ball, only Mohammad Shami returned with decent figures of 1/15 in his three while all the other bowlers went at an economy rate of over 9.50 runs per over. 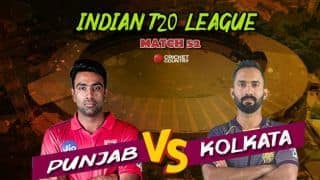