Winless so far, RCB would be keen to break their losing streak when they take on Kolkata Knight Riders at the Chinnaswamy Stadium on Friday.

Parthiv Patel, the Royal Challengers Bangalore wicketkeeper batsman, has admitted that the team is short on confidence having lost four straight games in the 2019 Indian Premier League but insisted their performances have been better than what the scoreline reads. RCB are by far statistically the worst team in the 2019 and have endured losses to Chennai Super Kings, Mumbai Indians, Sunrisers Hyderabad and the Rajasthan Royals.

Winless so far, RCB would be keen to break their losing streak when they take on Kolkata Knight Riders at the Chinnaswamy Stadium on Friday. (READ: What can we expect from RCB-KKR contest)

“Obviously, we can’t shy away from saying that we are under the pump,” Parthiv said on Thursday. “That’s definitely the case, there is no doubt about it. We can’t sit here and say we are 0-4 and we are happy about it! But the only thing, to be honest, we are quite positive about the team we have. We have always spoken in our dressing room about the kind of team we have, we don’t deserve to have lost four games in a row. (VIDEO: Winless RCB run into Russell-inspired KKR)

“I am quite happy the way I have played, but individual performances don’t matter as much. Whoever plays in the XI tries to do well and that’s exactly what I have been trying to do. Every time I get a chance to play, I try to perform to the best of my ability and I am glad the performances have come so far. ”

Parthiv has been the only constant in RCB s top order, having opened the tournament with three different players. In the first game of the tournament, he opened the batting with skipper Virat Kohli, before Moeen Ali and Shimron Hetmyer were tagged in as his partners. In the previous game against Royals, Parthiv was back opening the innings with Kohli, and scored a half-century to push RCB to 159 for 8.

“Personally, I have played for so many teams and played with so many openers, it doesn’t matter that much to me,” he said. “I have played a lot with Virat and with Moeen together. I know what my role is and it doesn’t worry me too much. Everyone knows their role. Before the game starts, everyone knows their role. It’s not like suddenly we decide that someone is opening.”

One of RCB s biggest letdown has been the failures of skipper Kohli and AB de Villiers. The two batsmen showed some form against Mumbai scoring 46 and an unbeaten 70, but overall have been inconsistent. In the previous game, both were foxed by Shreyas Gopal s wrong’uns, raising questions about their credentials against quality leg spin.

“The reason everyone is taking about Virat and AB is because of the performance they have given for RCB, and with Virat for India and AB for South Africa. I think more than anything, they will try and score big. AB had a good game against Mumbai here and Virat got a 40 as well in the same game. I am sure as everyone else, they will be as hungry as possible. From a team’s point of view and from the captain’s point of view, it is about winning games right now. I don’t think milestones matter to anyone in this team,” said Parthiv. 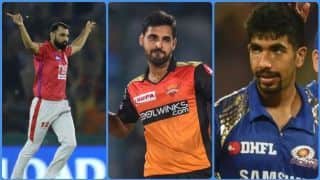 With World Cup around the corner, India physio Patrick Farhart keeps a track of players' fitness, workload in IPL 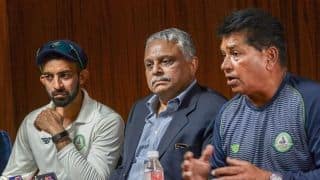 Want to spend time with family, received feelers from others: Chandrakant Pandit to assess future as Vidarbha coach