Kohli (67) in company of AB de Villiers (59 not out) scripted a superb run-chase as RCB beat KXIP in Mohali.

Skipper Virat Kohli was a relieved man after Royal Challengers Bangalore (RCB) finally snapped a six-match losing streak in this IPL with an eight-wicket win over Kings XI Punjab (KXIP) in Mohali on Saturday.

Kohli (67) in company of AB de Villiers (59 not out) scripted a superb run-chase, sharing a 85-run stand to lay the foundation, while Marcus Stoinis (28 off 16) played a crucial cameo as RCB overhauled the target of 174 with four balls to spare.

“After so many setbacks, the guys had desire. That’s one word we spoke about.” (IPL 2019, KXIP vs RCB: AS IT HAPPENED)

De Villiers, who was adjudged the Man of the match, said it was a long wait for the team.

“Waited for a long time for this, so we’re very happy. It’s a very small step in the right direction, but also a big one,” he said.

“I’ve got too much respect of the game to be upset about that, to get ahead of myself, to get too hard on myself. It needs one knock to get back in that confidence zone, and hopefully I can maintain that now.”

De Villiers had retired from international cricket to prolong his career in T20 cricket.

“I’ve decided not to play international cricket – to be as sharp as I can in the other forms of cricket around the world. Can’t keep playing 10-11 months a year and keep being sharp after 15 of my career.”

“It was a fantastic move to get Dale involved. We all know what he’s capable of. One thing for sure is he’ll give 200% with every ball. We know what we have to do. (ALSO READ: Kohli fined for slow over-rate)

“We have to win a lot of games of cricket. The next step is Mumbai, the Wankhede stadium. We love playing cricket there.”

Ashwin blamed his team for being sloppy on the field.

“We let ourselves down in the field. We dropped catches and let a lot of balls go through us. The dew helped the wicket on. It was really dry in the first half. It gets better to bat in the second half,” he said.

Asked why Sarfraz Khan was chosen to bowl the final over, Ashwin said: “There was only 6 runs to go and the ball was sliding on nicely. I thought the the best way against AB and Stoinis was to try and go with a leggie, not that Sam can’t defend.

“We tried with wrist spinners and even I came to bowl, but they were smart enough to knock around and not take any chances.

“With 38 needed off 3 overs, I had to back my best bowlers to do the job, didn’t quite work out today.”

Talking about the next matches, Ashwin said: “We play one here and go off to Delhi. We need to string some wins. It’s not a bad time to get some momentum back.” (FULL POINTS TABLE)

“I said to him (AB), that he is probably the best player of our generation and he showed it today,” he said.

On RCB finally getting a win, he said: “Yes, I was telling Gary (Kirsten) that I had brought two points for the side after my recent trip and we got it today (chuckles).

“The main difference tonight was that our bowlers came back well, which is key in this format.

“We kept coming back with the ball and then got partnerships with the bat.” 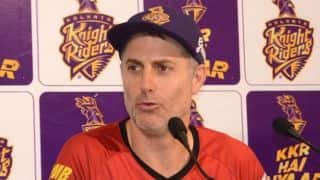 KKR have a number of guys who can take pressure off Russell: Katich