Buttler also commented on Dhoni's decision to step on to the field to argue with the umpires during on Thursday night.

Rajasthan Royals opener Jos Buttler said Chennai Super Kings‘ skipper Mahendra Singh Dhoni was “probably not right” in stepping on to the field to argue with the umpires during their IPL match in Jaipur on Thursday.

Dhoni lost his cool and rushed into the field of play to confront Indian umpire Ulhas Gandhe after he flip-flopped on a no ball on Thursday night, which led to a fine on the former Indian captain.

CSK went on to win the match by four wickets with Mitchell Santner smashing Ben Stokes into the stands off the final delivery.

“I was fielding at the boundary so I am not sure what had actually happened. I am not sure if that was the right thing to do,” Buttler said at the post-match conference.

“Obviously, tensions are running high in the IPL and every run counts and it was probably a big moment in the game, but whether stepping onto the pitch is quite right – I’d say, probably not.”

Rajasthan Royals suffered their fifth loss of the season, after being in a commanding position, a situation they have regularly faced this season.

“It (the loss) is a tough one to take, getting in a position to win the game but not being able to get over the line. The boys will be very disappointed but that has been the story of our season so far,” Buttler said.

Rajasthan have failed to seize opportunities and the wicket-keeper admitted that his side will have to learn the art of closing matches.

“We have had some games which we should have won but have not been able to do it for a few reasons. We have to play better and for longer.”

“We got to a nice start tonight, I couldn’t go further and capitalise on that and coming in in the middle overs in this ground is a particularly tricky period of the game to play, it’s not easy wicket to come and start your innings on in the middle overs,” said Buttler, who scored 23 off 10 balls.

After posting a modest target of 152, Rajasthan had the defending champions reeling at 24-4 before Dhoni and Amabati Rayudu stitched a 95-run crucial partnership.

“Our bowling innings started brilliantly we got them four wickets down very early but then we weren’t able to break down the next partnership of Rayudu and Dhoni which was crucial in the game,” Buttler said.

Despite good individual performances throughout the season, Rajasthan’s bowling and batting unit have failed to perform in tandem.

“We are just not putting those performances together, we are playing well in stages against quality opposition and some of the best players in the world if you can’t do it in the whole 40 overs, it’s tough to win the game,” Buttler said.

Rajasthan captain Ajinkiya Rahane said although he was happy with his team’s bowling effort, the side has to find the correct balance.

“I’m sure guys will take it on and learn from these mistakes. We have got to find the balance right depending on the conditions. I still feel you need to win crunch situations in T20 format.”

Man-of-the match Dhoni credited the Rajasthan bowlers and advised his side to learn from such hard-fought victories. “It was a very good game. Need to give credit to Rajasthan. They were slightly few runs short on what would’ve been a good score. But they put pressure on our batsmen and they were able to build pressure right to the end.”

“Once you win games like this, you learn a lot…It’s important to enjoy the win but also learn from the mistakes.” 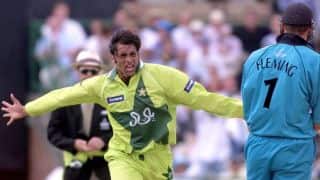 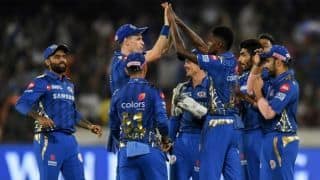