An irate MS Dhoni walked out onto the field in the final over before CSK sealed a win with a Mitchell Santner six.

Mitchell Santner hit a last-ball six as Chennai Super Kings (CSK) beat Rajasthan Royals (RR) by four wickets in the 25th match of the Indian Premier League (IPL) 2019 at the Sawai Mansingh Stadium in Jaipur on Thursday after a last-over drama, involving a no-ball, an aborted no-ball, a wide, a falling-flat-on-the-ground six from Ravindra Jadeja and an angry MS Dhoni walking out onto the field. (IPL 2019, RR vs CSK: AS IT HAPPENED)

Chasing 152 runs to win, CSK were in all sorts of trouble from the first over after Dhawal Kulkarni disturbed the timber to dismiss Shane Watson for zero. Suresh Raina perished in the second over after Jofra Archer s direct hit caught the left-hander short of his crease.

CSK had their backs to the wall after Faf du Plessis was caught in the deep as Jaydev Unadkat gave RR their third breakthrough. While Kedar Jadhav survived a DRS call, Archer scalped his first wicket, courtesy a Ben Stokes stunner at point, diving to his left as CSK were left reeling at 24 for four in the powerplay.

Dhoni walked out to bat when the team was in dire straits and in need of a partnership and like many times before, he came good as Captain Cool and Ambati Rayudu began the CSK recovery, with Dhoni taking calculated risks and hitting some big shots early in his innings.

Rayudu, meanwhile, brought up his first fifty of the season as he and Dhoni added 95 runs from 71 balls to keep CSK alive in the game. However, RR still managed to keep things in their favour as CSK needed 39 off the final three overs.

While Dhoni, who scored his second fifty against RR this season, managed to stay put till the final over, despite looking in all sorts of discomfort, with the CSK physio rushing onto the field to attend to the CSK skipper. However, Stokes, who bowled an eventful last over, managed to dismiss Dhoni as RR brought down the equation to 8 runs off 3 balls.

Then, began the drama as the on-field aborted a no-ball call on the fourth ball of the over and Dhoni stormed out onto the field The umpire did not reverse his decision as CSK needed four off the last ball. Stokes then delivered a wide before Santner hit a six off the last ball to seal a thrilling win for the defending champions. (FULL POINTS TABLE)

Earlier, after put in to bat, RR managed to cross the 150-run mark thanks to Shreyas Gopal s quickfire 7-ball 19 even as the bigwigs like Ajinkya Rahane, Stokes, Jos Buttler and Steve Smith failed to score big.

Buttler and Rahane offered a brisk start for RR as the hometeam raced to 25 after two overs. However, Deepak Chahar broke the opening partnership, dismissing Rahane, in the third over as CSK opted for a review to overturn.

While Buttler took on Shardul Thakur in his first over, hitting him for three consecutive fours, the Indian pacer had his man as Rayudu held onto a catch at extra cover to give CSK their second wicket. RR lost another wicket in the powerplay as Santner dismissed Sanju Samson for 6 after substitute Dhruv Shorey took a juggling catch in the deep.

Rahul Tripathi was the next man to get out as Ravindra Jadeja gave CSK their fourth wicket and reduced RR to 69/4 after 8.5 overs. The Indian all-rounder struck once again as he sent Smith packing in the 11th over to scalp his 100th IPL wicket.

Thakur, who had earlier dismissed Buttler, added one more wicket to his account after he dismissed IPL debutant Riyan Parag for 16. Stokes, who failed to score at brisk pace, got out for 28 in the 19th over. However, just when it looked that RR would struggle to put 140 on board, Shreyas Gopal, who scored an unbeaten 19 off 7 balls, took on Thakur in the final over and helped RR score 151/7. 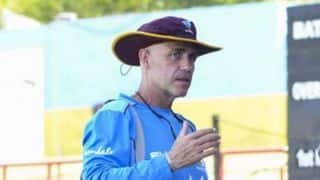