Once Smith fell just after reaching his fifty, the Royals, who at one point looked as if they ll notch up a score in excess of 200 lost a flurry of wickets in the last five overs.

Rajasthan Royals new captain Steve Smith reckoned his side could have posed a much better total following their six-wicket defeat to Delhi Capitals in the Indian Premier League (IPL 2019) in Jaipur on Monday.

Put into bat, Ajinkya Rahane notched up a superlative century, while Smith registered a second consecutive century to put the hosts in a good position. Once Smith fell just after reaching his fifty, the homeside, who at one point looked as if they ll notch up a score in excess of 200 lost a flurry of wickets in the last five overs which saw them finish nine runs short of 200.

We thought we didn’t finish off well with the bat, they pulled things back with Kagiso Rabada in the death overs. We couldn’t quite get hold of their bowlers, Smith, who s fifty 50 came in 32 balls with the help of eight boundaries, said at the post-match presentation ceremony.

With the recent defeat, Royals have registered their seventh loss from 10 matches which effectively puts them out of contention for the playoffs. (ALSO READ: Rishabh Pant breaks his silence on being ignored from India’s World Cup squad)

The wicket played well throughout, one of the best in the tournament. They took our bowlers on in the powerplay and Shikhar Dhawan played a magnificent knock, Smith said.

Heaping praise on Rishabh Pant s match-winning knock, the former Australia captain said: Pant is a young lad and he did a terrific job as well. We changed a few tactics, I didn’t want Shreyas Gopal to bowl in the Powerplay but decided to give him a bowl as the dew was setting in. It’s always hard for the bowlers with the dew around. The wicket stayed the same throughout the 40 overs. You can try and get wickets with your best bowlers or keep them for the death overs. 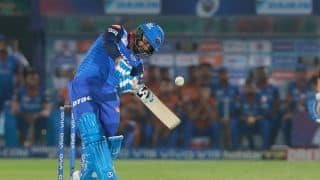