Shreyas Iyer, who remained not out on 58 off 49 balls, said it was satisfying to see his team through.

“We got a good start from Shikhar today, it made it easier for the batsmen to follow. He (Dhawan) has been giving us brilliant starts. If you get 50 in the Powerplay it’s really good and we got 60 today,” Iyer said of Dhawan who made 56 off 41 balls at the top of the order.

Iyer, who remained not out on 58 off 49 balls, said it was satisfying to see his team through.

“Really satisfied on winning this one after losing three home games. The way we played, it was really good to see. Losing them was really disappointing at the start but we recovered well,” he said. “Very satisfying to stay till the end. One of the top four has to stay till the end. I took the responsibility today and hopefully continue through the rest of the matches.”

He said the Kotla pitch was not suited for the kind of players his team has. “The kind of batsmen we have are on the rise players and love the ball coming on bat. But the pitch is really slow to play on. If you get set though you can get runs. Today I took the responsibility,” said the captain who was also adjudged man of the match.

About Nepalese legspinner Sandeep Lamichhane, who took 3 wickets for 40 runs, he said, “He (Lamichhane) is a very confident lad. When he goes for runs, he comes back strong. He’s fearless and positive in his approach. He benefits from Amit Mishra’s experience also.”

Dhawan, on his part, said, “Very important for us to win this game. We want to qualify for the knockouts. We got better at finishing the game, but I still feel we have to get more better.

“I knew that first six overs we have to cash in, and then I changed my strategy. It’s working for me, working for my side.”

He said on a slow and turning wickets like this, the first six overs were crucial. “I focus on my process and of course I feel that as an experienced player, I communicate more in the middle and make sure we don’t lose a wicket under pressure. I talk to the boys and they also talk to me.”

KXIP captain Ravichandran Ashwin said the total his side put up was just below par because of the dew.

“I thought we lost a few too many wickets in the middle despite Chris playing a great knock. Disappointing (about Mujeeb’s injury) but we have talent in the dressing room to bank on.

“I thought we were giving some of those soft boundaries here and there. If it was 12-13 off the last over, we would have fancied ourselves. Credit to Shreyas, he held his nerve and saw it through. we’ve lost a lot of close games and won a few. We need to catch the momentum here.” 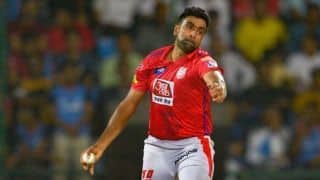