With this win, the home team also broke CSK s winning streak in IPL 2019. While Shane Watson and Faf du Plessis provided CSK with a solid opening stand, Watson s fall derailed the defending champions as Rashid led SRH s recovery and did not allow CSK to score more than 42 runs in the last ten overs.

While CSK would have needed quick wickets to make a match out of the below-par total, Warner and Bairstwo dashed those plans. The left-hander scored a 25-ball fifty while Bairstow remained unbeaten on 61 as the Kane Williamson-led unit won the match with 19 balls to spare.

10.37 PM: Tahir has taken off from where he had left in the last game, it seems. He strikes in his first over and removes Kane Williamson. SRH have lost two quick wickets. SRH 71/2 after 7 overs (Bairstow 17, Vijay Shankar 0)

10.27 PM: Fifty up in no time! The opening duo of David Warner and Jonny Bairstow are continuing their good run of form in this year’s IPL. The two have offered SRH a brisk start in chase. SRH 58/0 after 5 overs. (Bairstow 15, Warner 42)

SRH have done a remarkable job while CSK, playing without Dhoni, squandered an opportunity to build on a solid opening stand between Faf du Plessis and Shane Watson as the visitors were restricted to 132/5.

While CSK looked in a control of the match, they lost the wickets in a cluster, including two in an over off Rashid Khan, and lost their way after scoring 80 runs off the first 10 over. The visitors could only score 42 runs in the last ten overs.

09.08 PM: Rashid Khan is on a roll here and CSK are in a lot of trouble. The Afghanistan spinner has dismissed Raina and Kedar Jadhav in an over as CSK continue to lose wickets after a solid start. CSK 99/4 after 14 overs (Rayudu 6, Billings 0)

08.51 PM: Two wickets in quick succession as Vijay Shankar removes Faf du Plessis for . SRH are fighting back after giving away some quick runs. CSK 83/2 after 11 overs. (Rania 3, Rayudu 1)

08.47 PM: Nadeem has broken through the opening stand between Watson and Faf as he removes the former, just when he had started to find his groove. CSK 80/1 after 10 overs. (Faf 45, Raina 1)

08.40 PM: The CSK openers have shifted gears and how! While SRH managed to keep things tight in the first four overs, Watson and Faf are now scoring at a brisk pace, so much so that SRH will need a wicket or two to stem the flow of the runs. CSK 70/0 after 9 overs (Watson 30, Faf 37)

08.13 PM: CSK are slow off the blocks as Faf du Plessis and Shane Watson are kept under check by the SRH bowlers Bhuvneshwar Kumar and Khaleel Ahmed. CSK 10/0 after 3 overs (Watson 8, Faf 1)

Here’s what the captains said:

Suresh Raina: “We are going to bat first. I think batting first is a good option on this wicket. I think we need to be good in the powerplay. It’s all about executing our plans. Dhoni wanted to take some rest, he’ll be back in the next game. Karn Sharma comes in the side in place of Santner and as Dhoni is not playing, Sam Billings comes in for him.”

Kane Williamson: “Good decision Suresh. We were going to bat first as well. It’s imporant to bowl first up and do the job. The top two have been outstanding. It’s a tough format, but the guys need to go out with freedom and express themselves. The guys are looking forward to tonight’s game. Ricky Bhui and Abhishek Sharkma are out, Pathan and Nadeem are in. So that we get the right balance.”

07.32 PM: Suresh Raina is leading CSK tonight and the defending champions have won the toss and elected to bat against SRH.

Hello and welcome to our match coverage of Match 33 of the IPL 2019 between Sunrisers Hyderabad and Chennai Super Kings at the Rajiv Gandhi international stadium, Hyderabad on Wednesday.

Game 32 of IPL 2019 pits together the two finalists from the 2018 season, Chennai Super Kings vs Sunrisers Hyderabad in Hyderabad today.

The last time these two teams met was the IPL final on May 27, 2018 at the Wankhede Stadium where MS Dhoni s CSK beat Kane Williamson s SRH by eight wickets.

Three-time champions Chennai Super Kings sit on top of the IPL 2019 points tablewith seven wins from eight matches, while Sunrisers Hyderabad are at sixth place after losing three matches in a row.

Who will emerge winners today? As for form, stats and history, CSK are the team with the upper hand.

If Dhoni s team beat SRH, they will seal their spot in the IPL 2019 playoffs.

Manish Pandey is expected to be back in the playing XI with his replacement in the last game, Ricky Bhui, not making much of an impact.

What has been working for Chennai is that most of MS Dhoni s strategies have paid off. Dhoni has played various combinations depending on the surfaces and more often than not, his team-mates have responded pretty well. Keeping the pitch in mind, CSK may opt to replace Mitchell Santner with Harbhajan Singh.

In 18 matches between these two teams, CSK have won eight and lost just two. 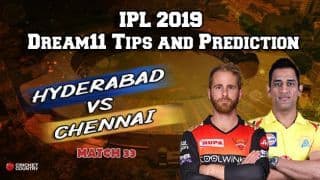