Midhun and Prashant Chopra came in for RR, while KKR included Harry Gurney ahead of Lockie Ferguson.

Kolkata Knight Riders will be bowling against the Ajinkya Rahane-led Rajasthan Royals after Dinesh Karthik won the toss at the Sawai Mansingh Stadium on Sunday. The only change for KKR was in the inclusion of left-arm fast bowler Harry Gurney ahead of Lockie Ferguson. (READ: Match Highlights)

“We will bowl first. The wicket looks good, will hold good for 40 overs, we would like to chase,” Karthik said at the toss. “We just need to keep the spirits high in the camp, the expectation on the team is always there, a score around 140 should be a par score. One change for us, Harry Gurney replaces Lockie Ferguson.”

Rajasthan, on the other hand, brought in Prashant Chopra, and Sudhesan Midhun was handed his IPL debut, while Stuart Binny and Varun Aaron were the ones to miss out.

“We have played three games in five days, we won against RCB and looking forward to this match,” Rahane said. “We were batting first, we need to play well against a team like KKR. We have to be aggressive against him (Russell) and bowl good line and lengths. Prashant Chopra and Midhun are in, Binny and Aaron miss out.” 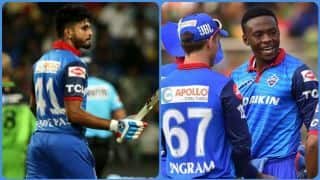