Hyderabad s David Warner returned to the Indian T20 League after missing out in the previous edition due to the ball tampering scandal and blazed his way to a 53-ball 85 to help Hyderabad to a formidable 181/3 in their opening fixture of the season against Kolkata at the Eden Gardens on Sunday. (FOLLOW: Kolkata Vs Hyderabad: Cricket Score)

Warner was up and running from ball one and showed no signs of rustiness. The left-hander had no played international cricket as he is serving a one-year ban, which is due to end next week. During the period Warner played grade cricket in Australia and the participated in the Canada T20 league and the Caribbean Premier League. His stint at the Bangladesh Premier League was cut short due to shoulder injury. (ALSO READ: David Warner overtakes Gautam Gambhir for most fifties in the league)

But, returning from the injury and playing his first game for Hyderabad in over two years, Warner was in top -form. However, he did concede that he was nervous before the game.

I was a but nervous in the dressing room and kept drinking pickle juice, Warner said during the mid-innings break. It is good to get out there and contribute. The elbow injury wasn’t all too bad and I’ve done a lot of work back home with my trainer .

Hyderabad s 181 was setup by a 118-run opening stand between Warner and Bairstow that came in just 12.5 overs.

It looked a nice wicket to bat on but it slowed down a bit which made us reassess after six overs, said Warner of Hyderabad s innings, adding, When you’ve got the momentum and you haven’t lost a wicket it is easy to free your arms and go after the spinners. But when you lose a wicket you have to reassess, but they came back well at the end. 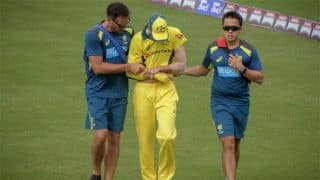