While praising Russell for putting together another masterpiece, Karthik added that the bowlers too needed to take responsibility.

It was another blitzkrieg from Kolkata Knight Riders (KKR) allrounder Andre Russell that saw his team snatch victory from the jaws of defeat at the M. Chinnaswamy Stadium against the Royal Challengers Bangalore (RCB), but KKR skipper Dinesh Karthik wants the others to rise to the challenge, especially the bowlers. (HIGHLIGHTS, RCB vs KKR)

While praising Russell for putting together another masterpiece, Karthik added that the bowlers too needed to take responsibility. The captain also appreciated the way Chris Lynn started at the top of the innings with a 31-ball 43.

“Those kind of knocks, you don’t talk much. We trust him as a player. It’s important to give him an atmosphere where he’s happy and he just keeps performing. Yes, it was hard to play strokes against spinners with the ball gripping but was easier against the fast bowlers,” he said after the game on Friday.

“I think as much as well he batted, it’s time we all started to bowl better and help the batters. It was nice to see Lynn bat like that and take responsibility.”

Lynn though was all praise for Russell and said that the West Indian is just too good. Looking back at the game, he added that both teams gave opportunities to the other (on-field), but Russell just turned everything in favour of KKR with the bat in hand.

“We keep putting him in tough situations and he keeps lifting his game. He is just too good. Two-hundred and fifteen was probably par on that wicket. Both teams gave opportunities. We dropped Kohli and AB de Villiers and RCB also dropped a couple of chances. Luck was on our side. Change of fortune for us. It is unbelievable and entertaining for us. He keeps doing it. He is a billion dollar man for KKR,” he said. 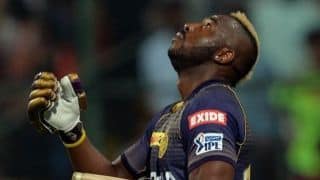