KXIP squad is heavy on players from Karnataka including the captain himself, Mayank Agarwal and Karun Nair. Anil Kumble, the head coach, too is from Karnataka.

KL Rahul expects head coach Anil Kumble to do bulk of the planning, which he feels will help him immensely in his debut as captain of Kings XI Punjab in the IPL, beginning in UAE on September 19.

Like the other seven teams, KXIP players are undergoing a six-day mandatory quarantine in the UAE.

“To have someone like Anil Bhai around helps me immensely this season. I share a very good relationship with him off the field, coming from the same state,” Rahul told the IPL website.

“I think he (Kumble) will make my life as captain very easy. I know that he would be doing most of the planning and I just have to go out there and carry out the plans,” said the 28-year-old.

Rahul was in red hot form in the past two seasons while batting alongside Chris Gayle, scoring 659 and 593 and in 2018 and 2019 respectively.

Glenn Maxwell’s return has boosted their middle-order and the skipper stressed on his importance to the team.

“Maxi has been with Kings XI before and has had a successful run with the team. He was one player we were very clear we needed going into the auctions.

“On a given day, he will take down any bowling attack and we’ve felt that the last couple of seasons we have missed that impact player in the middle order,” said Rahul.

In Rahul and Gayle, KXIP make one of the most destructive opening pairings in IPL. The captain expects the West Indian to keep winning games for the team.

“I have played for several years with him and share a great friendship with him. He’s a great guy to have in our team. He will be part of our core group and with the kind of experience he has, he will definitely be somebody that wins a lot of games for us.

“Looking forward to the 2020 season, it’s not like a usual IPL season, it is going to be very different for all of us. I am excited about that. I hope we can make this season count and win a lot of games for the team,” he added.

KXIP are yet to win the IPL with their best finish coming in 2014, when they reached the final. 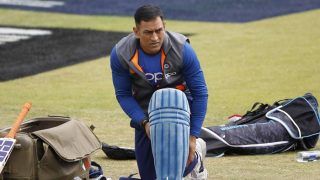 IPL 2020: Kings XI Punjab Captain KL Rahul Lavishes Praise on MS Dhoni, Says We Have All Grown up Wanting to be Like Former India Captain