Earlier, Cricket West Indies (CWI) had expressed their keenness to host South Africa for a Test or T20 series in September.

South Africa’s tour to the Caribbean has been postponed indefinitely because of the coronavirus pandemic and the Indian Premier League (IPL), Graeme Smith, CSA’s director of cricket, confirmed on Saturday (August 1).

Earlier, Cricket West Indies (CWI) had expressed their keenness to host South Africa for a Test or T20 series in September.

However, Smith said there’s no time to schedule a tour to the Caribbean as many South Africa players will be travelling to the United Arab Emirates (UAE) to play in the Indian Premier League (IPL), which is set to be held from September 19 to November 8. South Africa’s IPL contingent consists of Faf du Plessis, Imran Tahir, AB de Villiers, David Miller, Chris Morris, Dale Steyn, Lungi Ngidi, Kagiso Rabada, Hardus Viljoen and Quinton de Kock.

“We’re struggling to find a time now, with the IPL being fitted in. It looks like our players are going to be needed from the beginning of September, government permitting and travel permitting.”

Smith hopes for a ‘really busy period for South Africa cricket’ if ‘all goes well’ in the coming months.

“I expect that once things get up and running, our team, on the men’s side, I would say from November onwards, if all goes well, it will be a really busy period for South African cricket, probably playing in times that we haven’t played before and trying to cram in a lot of the missed tours,” he said.

South Africa scheduled to tour Sri Lanka for three ODIs and as many T20s in June before heading to the Caribbean to play two Tests and five T20s from July 23 to August 16. Both the tours were postponed due to the pandemic. 'Hopefully, We Should Crack It' - India's Mithali Raj Eyes World Cup Glory In 2021 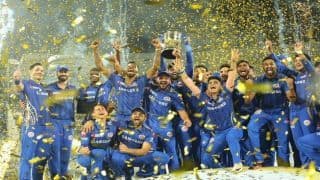