In the title defence, Mumbai chased down the target of 157 with 8 balls to spare at Dubai International Cricket Stadium.

Skipper Rohit Sharma powered Mumbai Indians to their record-extending fifth IPL title with a comfortable 5-wicket win over Delhi Capitals in the final on Tuesday. In the title defence, Mumbai chased down the target of 157 with 8 balls to spare at Dubai International Cricket Stadium. Rohit slammed 68 runs off 50 balls in the summit clash, as his innings was laced by 5 fours and 4 sixes. MI became the first team to win the IPL trophy for five times extending their lead over Chennai Super Kings, who won it thrice.

Rohit, who was going through a rough patch with the bat, returned to form at the right time to make things easy for Mumbai in the summit clash. He shared crucial 45-run partnerships with both Quinton de Kock and Suryakumar Yadav. And later joined hands with Ishan Kishan to take MI to a comfortable position with a 47-run stand. The southpaw remained not out on 33 runs off 19 balls and took MI to finish line alongside Krunal Pandya, who scored the winning run.

Earlier, after opting to bat first, Delhi Capitals were restricted to 156/7 on the scoreboard after 20 overs despite the fifties from Shreyas Iyer and Rishabh Pant.

Nothing went well for Delhi right from the start of the game as Trent Boult got rid of in-form Marcus Stoinis on the first ball of the match, he also made Ajinkya Rahane a short one in the middle by removing him for just 2. His opening spell in the Powerplay was hardly indicative of any groin strain that he had sustained during the Qualifier 1. The Kiwi pacer returned to attack in the 18th over and picked another crucial wicket of Shimron Hetmyer in the quest to dent DC’s big score hope.

Iyer remained unbeaten on 65 off 50 balls, as his innings was laced by 6 fours and 2 sixes. While the wicketkeeper-batsman returned to form at the right time and scored 56 runs off 38 balls. It was the first fifty-plus score for Pant in the ongoing season as he hit 4 fours and 2 sixes.

MI’ bowlers came back strongly during final five overs as Capitals managed only 45 runs, losing four wickets in the process. 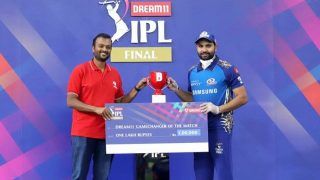