Shikhar Dhawan fulfilled the captain's duties during the end stage of what turned out to be a close affair as DC reclaimed the top spot in IPL 2020 points table. 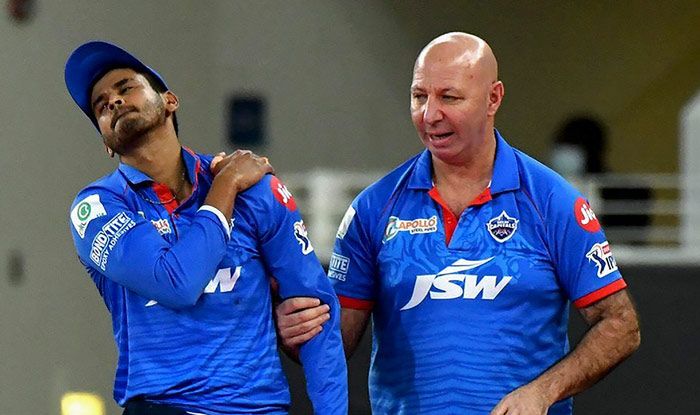 Delhi Capitals captain Shreyas Iyer had to leave the field against Rajasthan Royals on Wednesday after hurting his left shoulder while fielding. Iyer required immediate attention of team physio and looked in considerable pain as he walked back to the dressing room.

Shikhar Dhawan fulfilled the captain’s duties during the end stage of what turned out to be a close affair as DC reclaimed the top spot in IPL 2020 points table.

Dhawan said while Iyer his able to move his shoulder, the extent of injury will only be known by Thursday.

He (Iyer) is in pain but good thing is he is able to move his shoulder. I haven’t spoken to him at length. We’ll get proper report tomorrow,” Dhawan said after the match.

“One moment it was quite even and to pick it back from there was a team effort. It was important we stay positive as a team. I knew their batting isn’t deep and if we got their top-order we can get them,” Dhawan, who scored a fifty, said.

Dhawan was all praise for his pacers. “Every time, we want them to deliver they’re delivering,” he said.

He also credited right -arm pacer Tushar Deshpande, who made his IPL debut on Wednesday, for his courageous effort. “He showed courage. The line and length he bowled was amazing. We have to keep the momentum. It’s a long tournament. We will keep the process going,” Dhawan said.

RR captain Steve Smith blamed the loss of wickets in clumps added by the slowness of track for his team’s defeat.

“It was disappointing. The wicket slowed up a bit as the game went on. We got off to a good start with Jos (Buttler) and (Ben Stokes) Stokesy, then we lost a couple wickets and got another partnership between Stokesy and Sanju (Samson), then again lost wickets in clumps and on slow wickets it is hard to make up too many runs at the back-end,” Smith said.

“We needed to take it a bit deeper from some of our batters and we were not able to do that. We thought we bowled well at the back-end and restricted them to 160-odd, that was probably around par on this wicket,” he added.