VIVO IPL 2021, RR vs PBKS 2021 Scorecard: Check the latest points table after the match no. 4 of the Indian Premier League between Rajasthan Royals and Punjab Kings and also see the Orange Cap and Purple Cap holders in the ongoing IPL 2021.

IPL 2021 Points Table Latest, RR vs PBKS 2021: Sanju Samson’s sensational hundred on his captaincy debut went in vain as young pacer Arshdeep Singh held his nerve in the final over to help Punjab Kings pull off a thrilling four-run win over Rajasthan Royals in a high-scoring IPL game at the Wankhede Stadium on Monday. KL Rahul – 91 runs – and Deepak Hooda – 64 off 28 balls – powered Punjab Kings to an imposing 221 for six after being put in to bat on a batting beauty. Samson almost took Royals home with a breathtaking 119 off 63 balls but was caught off the game’s final ball with left-arm pacer Arshdeep defending 13 runs in the last over.

Samson, who effortlessly struck seven sixes and 12 fours, was so confident of taking his team home that he refused a single to Chris Morris on penultimate ball of the game when Royals needed five runs off two balls. In the end, it was not to be for Royals as Punjab scraped through. Chasing 222, Rajasthan lost opener Ben Stokes – duck – early. Arshdeep then removed Manan Vohra – 12 – as he lobbed a regulation return catch, leaving Royals in trouble at 25 for two. Samson and Jos Buttler – 25, who struck four successive boundaries off Riley Meredith, tried to take the game deep with a 45-run stand. Pacer Jhye Richardson pegged Rajasthan back by cleaning up Buttler. Samson, who was dropped twice, completed his fifty with a boundary and kept playing his shots to keep his team in the game despite losing partners at the other end.

With a stunning hundred on his captaincy debut for Rajasthan Royals, captain Sanju Samson pipped his opposite number KL Rahul to claim the number one spot in IPL 2021 Orange Cap list. Samson played a knock of 119 runs off 63 balls that included 12 boundaries and seven huge maximums. Meanwhile, Rahul missed out on a well-deserving hundred by nine runs – he scored 91 off 50 deliveries to help his team post a gigantic total of 221/6 in 20 overs versus Rajasthan Royals. Delhi Capitals opener Shikhar Dhawan – 85 runs is at the third spot. He is followed by KKR batsman Nitish Rana and Delhi’s Prithvi Shaw.

Royal Challengers Bangalore all-rounder Harshal Patel – 5 wickets in one match – continues to don the coveted IPL 2021 Purple Cap – most wickets in the tournament. He is followed by Rajasthan Royals’ young pacer Chetan Sakariya, who picked up 3/31 in his debut IPL game against Punjab Kings on Monday. Sakariya is followed by Punjab pacer Arshdeep Singh who bowled the match-winning final over against Rajasthan Royals at the Wankhede Stadium. Arshdeep finished with figures of 3/35 against Royals. Delhi Capitals pacer Avesh Khan and Sunrisers Hyderabad ace all-rounder Rashid Khan round off the top-five in IPL 2021 Purple Cap list. 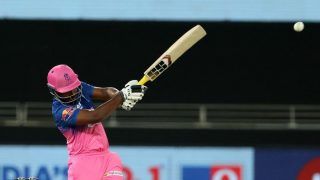