Bhatia's base price was Rs 30 lakhs, and there was frantic bidding for him.

All-rounder Rajat Bhatia was on Thursday bought by the Rajasthan Royals for Rs 1.70 crore during Day Two of the Indian Premier League (IPL) 2014 Auction.

Bhatia’s base price was Rs 30 lakhs, and there was frantic bidding for the seasoned domestic cricketer among the IPL franchises, and the Rajasthan Royals won the bid.

Bhatia has played for the Kolkata Knight Riders in the previous editions of IPL.

Rajasthan Royals (RR) had retained five players — Shane Watson, Stuart Binny, James Faulkner, Ajinkya Rahane, and Sanju Samson. This meant that they had no ‘Right to Match card’ available to them when they went for the auction. 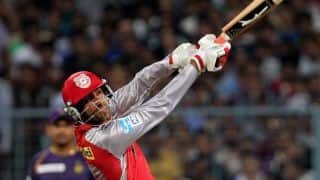