India Under-19 captain Vijay Zol has been sold to the Royal Challengers Bangalore for Rs 30 lakhs in the Indian Premier League (IPL) auction 2014.

The 19-year-old left-hander has been a rising star and initially there wasn’t a bid. However, the auctioneer had hit the hammer, but then realized that Bangalore had bid for him. There were no other bids so he went for his base price.

Meanwhile, Baba Aparajith, Zol’s teammate during the 2012 under-19 World Cup has been snapped by the Chennai Super Kings.

Shrikant Aniruddha and Tirumalasetti Suman went unsold. Annirudha had played for Chennai Super Kings in the past, whereas Suman played for Deccan Chargers, Mumbai Indians and Pune Warriors India. 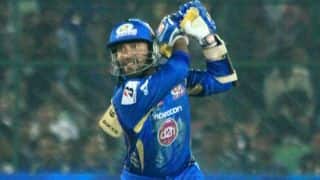