Since the combinations keep changing in the IPL team, it is tough to bowl in IPL.

India’s pace spearhead Mohammed Shami feels that it is easier to share the new ball in the Indian team with Bhuvneshwar Kumar than bowling for Delhi Daredevils since the combinations keep changing in the Indian Premier League (IPL) team.

“Bowling for India is easier. With Bhuvi operating from the other end, it becomes a tad easier for me. His job is to swing the ball and try to contain. I can freely attack from the other end. Here the combinations keep changing. We are still trying to find the right mix. Nadeem (Shahbaz) is a good bowler but I have to be more lethal with the new ball,” Shami said after training at Palam ground.

The speedster is also trying to pay heed to Shoaib Akhtar’s advice of working on his run-up. “Shoaib bhai has advised me to never ever compromise on pace. The other subtle changes that he has suggested are also valuable inputs. I will certainly work on these aspects as it will help me become a better bowler for India in near future.” He was happy in the manner Gary Kirsten has guided him. This is first time I am working with him (Gary). He guides us very softly and does not put mental pressure on us.”

Ditto for skipper Kevin Pietersen, who according to Shami is “positive, aggressive and never lets the intensity drop.” Shami admitted that they haven’t been upto the mark as far as death bowling is concerned. “We need to improve our death bowling. We are putting in a lot of effort and hopefully we will put up an improved performance. Our aim is to restrict opposition in the range of 130-140. The wickets would be slightly different over here. In Abu Dhabi, the strips had greenish tinge and the amount of bounce would be different over here,” he concluded. 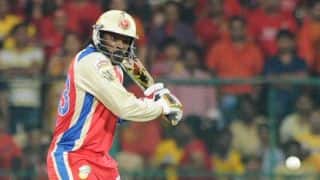 IPL 7: We will look to bounce back on home turf, says Chris Gayle