Ambato Rayudu confident of Mumbai's chances of making it to the playoffs.

It was a dismal start for Mumbai Indians (MI) in the Indian Premier League (2014) with five losses in a row. They have won three in their last four, On Monday, MI comprehensively beat Sunrisers Hyderabad. Scoring his second consecutive fifty, Ambati Rayudu said that it was a matter of time that the team started clicking together.

“As a team, unfortunately, we have not been winning as many games as we would like, but it is good to see that all the players are actually coming back into proper form. It is just a matter of time that we start playing perfect games like we did tonight against the Sunrisers Hyderabad. Every season is a different challenge and as a team we would hope to qualify for the Playoffs,” Rayudu was quoted as saying by the official website of IPL.

Rayudu is among the few players who is among the runs for Mumbai. “I am happy the way I am batting right now. Initially, I was getting a few starts, but I was unable to get the big scores. It is something that I am working on,” he said. The right-hander has been shuffled in the batting order across seasons but he remains unperturbed. “I think you need to adjust and adapt as per the situation in this format of the game. In all these years with the Mumbai Indians, I have almost batted at every number. I believe if you are a good reader of the game and if you are not too rigid in the head, a batsman can bat at any position he wants.”

Rayudu scored 68 and stitched a match-winning 130-run second-wicket stand with Lendl Simmons. He was also playing on his home turf against the Sunrisers. “I am from Hyderabad and it is a very special place for me. This is where I learnt and started playing cricket. To have played for Hyderabad and coming back to this ground is always special. I am happy I could play well tonight in front of my home crowd,” he said.

On playing the role of a finisher, Rayudu said, “I don’t think there is a set rule or a pattern that you would follow to finish games. At times, when the game gets too easy, it gets a little difficult to finish because you tend to relax a little. Tighter the game goes, the better it is to finish. I will try and stay till the end and look to finish games for my side.” 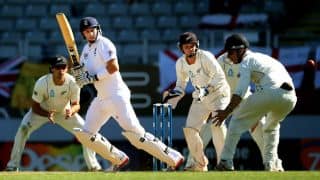