Starc said anything is possible when de Villiers is around.

Royal Challengers Bangalore (RCB) pacer Mitchell Starc on Monday said that his team is eagerly waiting to face Mumbai Indians (MI) in their backyard, especially after winning a thriller against Sunrisers Hyderabad (SRH) in Bangalore.

“It isn’t too early to face Mumbai Indians in their backyard. Some players have hit form. Bowlers are doing well. AB [de Villiers] has come good and Chris [Gayle] also shown his bit. Bring it on, will play tomorrow for sure,” he told reporters.

Starc, who finished with a magnificent two for 21 last night, said the bowling and fielding of the Royal Challengers had been good throughout the tournament so far. “We have been restricting scores of our opponents and also succeeded in doing so yesterday by restricting Hyderabad to 155 for six,” he said.

Showering praise on de Villiers, Starc said it was an amazing innings and he was lucky to witness it at the other end. “It was great to see our team cruising home to a victory after the hard work done by AB. It was a fantastic all-round effort by the boys and it feels great to register our first win at home this season,” Starc said. De Villiers produced one of the most devastating Twenty20 innings as he smashed an unbeaten 89 off just 42 balls in RCB’s dramatic win over Hyderabad.

Asked whether he had hopes of winning the match after losing early wickets, Starc said de Villiers made it possible to believe. “Anything was possible when de Villiers is around and it was important for him to give as much strike to him as possible, and not lose wicket at the other end, which I did,” he said.

Asked about Yuvraj Singh and his form, Starc said, “Look, we won the game. It’s doesn’t matter. We got home which is the main thing.” 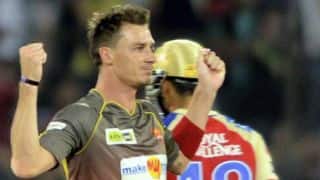