With a half-century and a 40 in the last two matches, Vijay hopes to continue good run in India leg of the tournament.

Stylish opening batsman Murali Vijay is slowly finding his feet in the colours of his new Indian premier League (IPL) team Delhi Daredevils and he says he wants to be consistent and finish off more games. After playing for IPL’s most decorated team Chennai Super Kings for five years, Vijay changed sides this season to open for Delhi and after three quiet innings, he has slowly started to make a mark with solid scores of 52 and 40, which helped his side beat Mumbai Indians in their last match in UAE on Sunday.

“I want to be more consistent in my performances. I am working on that aspect. As far as my batting is concerned, I have been batting well. Once I get consistency in my batting, I will get going. I have been batting pretty well in the domestic season and have been hitting the ball really well. I just want to carry forward my good form to this IPL season. I am happy that my contribution has helped my team win [against Mumbai],”,” said Vijay, talking about his experience so far in the Delhi side.

Vijay found his rhythm against Mumbai but got out while unnecessary trying to slog Rohit Sharma. Not surprisingly, he was disappointed. “I should have won the match from there. There was no pressure on the team and on myself. I know I should have finished the game being the set batsman. I knew the batsmen coming in would find it difficult. I will try and finish the next game for the team,” the Tamil Nadu batsman was quoted as saying by IPL official website.

Vijay also spoke about the uncomplicated methods of the Delhi team which allows every player to play freely. “Kevin Pietersen and the Daredevils have a simple game plan. No one in this line-up has to be told anything because everyone in the team has played some level of international cricket. KP definitely brings a lot of experience to the team and it is good to be around with some good players,” he said.

Vijay may have played for Chennai all these years before coming to Delhi, but he says he loves his new dressing room as well. “I played for five years for Chennai Super Kings and it is going to be a different feeling for me in Delhi Daredevils dressing room. But the boys in the team are really good and we are looking forward to having a good season. We have nine more games to go and hopefully we can take this winning momentum into the India leg of the tournament,” he said.

Delhi have ended their UAE leg of the IPL on a high note. They next play Rajasthan Royals in their home ground — Ferozeshah Kotla — on May 3. 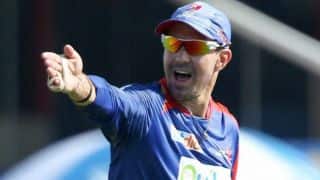