Both teams are coming from a loss but momentum clearly in Punjab's favour.

After being outplayed by Mumbai Indians in their previous match, Sunrisers Hyderabad (SRH) face another tough battle when they take on table-toppers Kings XI Punjab (KXIP) at the Rajiv Gandhi International cricket stadium in an India Premier League (KXIP) match on Wednesday.

The Kings XI Punjab have had a rampaging campaign in this edition of the IPL before the Kolkata Knight Riders got the better of them in a match on May 11 at Cuttack. Having suffered a sudden setback, the Punjab side would be keen to come all guns blazing against the Sunrisers Hyderabad, who cannot afford to lose any more matches in order to stay in contention for a place in the semi-finals.

Punjab’s star duo of Glenn Maxwell and David Miller have been in scintillating form and the team’s old warhorse Virender Sehwag has also, of late, been reminding about his batting prowess. While batting has been the mainstay of Punjab, the bowling department is no less potent with the presence of pacer Sandeep Sharma, one of the top wicket-takers this season and Australian import Mitchell Johnson, who slowly gathered some momentum after a rather indifferent start. The Punjab side also boasts of the seasoned Thisara Perera, who played for Sunrisers last year, Cheteshwhar Pujara, Shaun Marsh, Murali Kartik and L Balaji.

Sunrisers Hyderabad have had a decent track record on home turf though the seven-wicket defeat against Mumbai Indians came as a big setback. The hosts now have to demonstrate the combined might of their star batsmen like Aaron Finch, David Warner, captain Shikhar Dhawan and Darren Sammy.

The bowlers spearheaded by South African tearaway bowler Dale Steyn and comprising the young Bhuvneshwar Kumar, Moises Henriques and Irfan Pathan would also have to come up with something special to keep SRH alive in the tournament. The Hyderabad bowlers were at the receiving end of the onslaught by Mumbai’s Ambati Rayudu and Lendl Simmons, which resulted in the hosts losing the match.

Hyderabad’s chief coach Tom Moody acknowledged that the team needs to plug the loopholes in the bowling attack for the outfit to make victory a tough proposition for the rivals. Another factor which would be equally troubling for both the teams is the sultry weather here as the match is scheduled to start at 1600 hours. 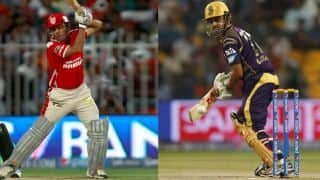