Having posted four wins on the trot and six overall, the homecoming could not have come at a better time for Kolkata Knight Riders (KKR), who are aiming to clinch the playoffs berth as they prepare to take on Chennai Super Kings (CSK) in the Indian Premier League on Tuesday.

With this being the last lap of a whirlwind league phase that began in the UAE, a team like Kolkata Knight Riders who relish the home conditions — the slow track complemented by a raucous crowd — will savour the homecoming more than anybody else.

While the always-reliable wily spinner Sunil Narine — 15 wickets and most economical (6.09) — continues to be the most vital cog in their wheel, it’s the emergence of explosive batsman Robin Uthappa that has contributed immensely to the team. Consider this: Uthappa’s average in the India leg of this IPL is 54.16 from six matches — two half-centuries and four 40-plus knocks. He has scored 422 from 11 matches of which 325 have come in the India leg.

The ploy to open the batting with Uthappa certainly has done wonders for the side while skipper Gambhir too has been contributing. And they would heave a sigh of relief after seeing Ryan ten Doeschate and ‘match-winner’ Yusuf Pathan’s cool-headed unbeaten knock to seal a seven-wicket win in Hyderabad in a last-over finish on Sunday night.

The senior Pathan was at his destructive best, smashing two sixes and as many boundaries in his 27-ball 38, while the Dutchman hit a six and a boundary with 10 required from the last over. The win was important as it put Kolkata two points clear of Bangalore and four against Hyderabad in the three-way race for the fourth spot in the playoffs.

In such a scenario, Gambhir will be keen to guard the team against complacency as they take on two-time former champions Chennai, the most consistent side in the Indian Premier League, and who have virtually qualified for the play-offs. Chennai would be smarting from their home defeat to Royal Challengers Bangalore who kept their campaign alive after posting a five-wicket win.

Having posted eight wins from 11, second-placed Chennai can afford to relax and even if they lose their remaining three games, they may be through on net run-rate. Dhoni always believes in having a settled unit and there has not been much chopping and changing. David Hussey played his first match yesterday after he was included in the squad as cover for Brendon McCullum who is set to fly home for the birth of his baby.

The fact is that Super Kings have not been bowled out even once in this tournament and their specialists bowlers Mohit Sharma and Ishwar Pandey have not been required to bat at all. The new opening combination of Dwayne Smith and McCullum has been their high point in season seven, when other teams have struggled to put on a consistent show at the top.

The big hitting West Indian has been been Chennai’s gain and Mumbai’s biggest loss as Smith sits second in the runs tally with 449 from 11 matches with five 50s, while the Kiwi opener has accumulated 352 runs, including three half centuries. McCullum, who has a flight to New Zealand tomorrow, is expected to play while Hussey will come in the middle order.

At the Eden Gardens track, the three spin warriors of Kolkata — Narine, Shakib Al Hasan and Piyush Chawla will look to take the maximum advantage and it will be an interesting battle against Chennai’s long batting line-up that includes Smith, McCullum, Suresh Raina, Hussey, Ravindra Jadeja and Dhoni.

While the eight overs of Narine and Shakib will be key, the Chennai batters will look to go for the kill against Chawla. 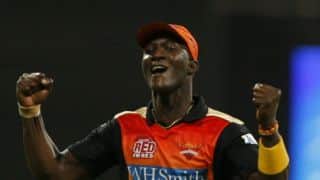