Faf du Plessis says that Dwayne Smith is making runs when he is getting the opportunities.

In an interview with iplt20.com, du Plessis spoke of the match against Mumbai at Wankhede. “It was a hard-fought victory. It was not one of those victories where we smashed the guys all over the place. It was a greasy performance, but it was nice to see that we could win games like that as well. We have been doing really well with the opening pair blasting the bowlers away or while coming at the end and attacking the opposition. To win games like this really shows the team’s ability to win in different conditions,” said the South African.

Speaking about his partnership with Dwayne Smith, du Plessis said, “The wicket was slow and it was not easy for [Dwayne] Smith to time the ball like he normally does, but he still managed to get runs for us. We just wanted to keep the scoreboard ticking and play good cricket shots and not try to hit the ball out of the park. But Smith is a power hitter and he always looks to go for the big shots, and it is nice for me to assist him in that and get him on strike as much as possible, which worked tonight.”

He went on to talk about Smith’s impressive run in IPL 7. “He is in good form…and he is making sure that he is using it to get runs on the board. It is easy to get a 20 or a 30 and then get out. But what he is doing at the moment is making runs when he is getting the opportunities, which is really important. You can never take these things for granted because a batsman quickly gets out and loses confidence, and it gets tough to get runs then. It is good to see him cashing on his good nick.”

Elaborating on Smith’s batsmanship, du Plessis said, “There is thought behind his batting. He has got a really good shape when he hits the ball. He gets into really good positions and that is the reason why he is able to hit the ball so far and so consistently. As batsmen, there is a lot that we can learn when we see him bat. It is not just about power, but also the shape of the swing on that given night.”

When asked which aspect of Smith’s batting du Plessis would want for himself, he said, “I would want his strength. I am more of a timer of the ball when it comes to hitting sixes. With him, it is sheer strength and there is a lot of power that goes on that bat of his. I wish I could get his strength in my batting.”

He concluded by saying, “I am feeling confident at the moment, but it was tough for me in the beginning. I have been batting at the top for CSK, but it is a different role for me this year. We have a powerful opening pair and the batsmen below do not always get their opportunities. There have been times when I have walked out to bat and there are three or four overs left, which is not something I am used to. But I feel the more I play in this new role, the more I will get accustomed to it. I am glad I am getting better at my new role during the business end of the tournament, which is good for the team.” 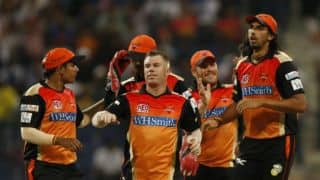