IPL 7: Yuvraj Singh has shown Indian Cricket that he is well and truly back, Trent Woodhill

IPL 7: Yuvraj Singh has shown Indian Cricket that he is well and truly back, Trent Woodhill

Batting and fielding coach Trent Woodhill says it was just about reminding them what they are capable of.

Royal Challengers Bangalore (RCB) were touted as the giant killers with the bat ahead of the Indian Premier League (IPL) 2014 season. 10 matches down the line, the misfiring batting unit seems to be coming in true colours. And the man in limelight is Yuvraj Singh who has smashed his way back to form with blistering knocks in the last two matches. RCB batting and fielding coach Trent Woodhill who worked with Yuvraj during this season has said that Yuvraj has given an indication that he is truly back in form.

“Yuvraj was coming back from an adverse year or so and he has shown Indian Cricket that he is well and truly back. There’s no one in the competition who can bat the way he batted the other night. With guys like Yuvraj it’s just about reminding them what they are capable of. And that doesn’t have to happen in the nets. That can be over a coffee or taking a walk. It’s just about letting him know that I am asking him to do only that what he is capable of doing, nothing more,” Woodhill was quoted as saying by the official website of IPL.

While Yuvraj has struck form, RCB are yet to see the best of Virat Kohli and Chris Gayle this season. Woodhill argued that it is not possible to demand success from players. “You cannot demand success off somebody; you’ve got to put them in an environment where they feel comfortable to succeed.

“Chris has come out of an injury and he’s still finding his way back, although we have seen flashes of brilliance from him. We’re hoping that in the last four games, we see the Chris Gayle of the last year. Virat is so passionate; it’s been a pleasure working with him. With him, it’s almost just the case of making sure that he stays calm.”
On the presence of veteran spinners Daniel Vettori and Muttiah Muralitharan, Woodhill said, “Having those two helps in general – great people and they’re also still bowling well. Dan still likes to bowl in the nets and it’s impossible to take the ball out of Muralitharan’s hand.” 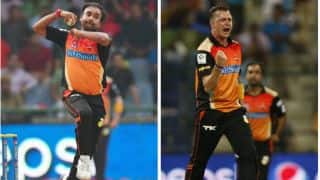