The southpaw is excited to play with star players like Ab de Villiers and Chris Gayle.

Indian Premier League’s (IPL) costliest player Yuvraj Singh feels that Royal Challengers Bangalore (RCB) is a team where he can express himself in the company of start cricketers like Virat Kohli and Chris Gayle.

Yuvraj was brought by Bangalore for a whopping Rs 14 crore on the opening day of the two-day IPL 7 players’ auction, thereby becoming the most expensive player purchased at the IPL auctions.

Even though he is conscious about the expectations he will have to face after getting the top pay packet, Yuvraj feels Bangalore will provide him the perfect platform to “express” his talent.

“I am very happy to go to Bangalore and I am looking forward to playing alongside the likes of Chris Gayle and AB [de Villiers] and all the other great guys in the team. I just feel that I am going to a place where I can express myself,” he said.

“Everyone is talking about my being the highest-paid player and being bought for so much at an auction, that also means that there is a lot of focus on you and on how you have to win matches, it adds responsibility.

“In Bangalore, we’ve got a lot of guys who are match winners on their own — Gayle, AB, Virat [Kohli], Albie [Morkel], [Ravi] Rampaul all can just take games away single-handed. It’s a great bunch. It is great that in that kind of environment, I can go and express myself,” said the flamboyant left-hander, who was the player of the tournament in India’s ICC World Cup 2011 triumph.

Yuvraj outpriced Gautam Gambhir who was the most expensive player before IPL 7 auction, with a price of Rs 11.04 crore from Kolkata Knight Riders (KKR) in 2011.

Yuvraj’s whooping price tag came as surprise for many as of late he has been out of the Indian team due to poor form.

Although he got a cold shoulder from the national selectors for the 50-over 2013-14 Asia Cup in Bangladesh, Yuvraj has found out a place in Indian squad for the ICC World T20 2014 to be held in Bangladesh after the continental One-Day International (ODI) championship.

“But the World T20 is up first and that’s what I’m focussed at the moment and I am trying to play as much domestic cricket as I can to prepare myself for that. I hope for the best,” said Yuvraj, who made a remarkable comeback to international cricket after successfully battling cancer.

“I’m not looking at making any big statement. At the end of the season, it’s not like I have to prove anything to anyone else (about) what I can do. I have to prove to myself that I have it in me,” he said.

“You are not going to be thinking about what others are thinking and what you must prove to them. You have to prove things to yourself and that is what I am looking to do with all the opportunities I get,” he added. 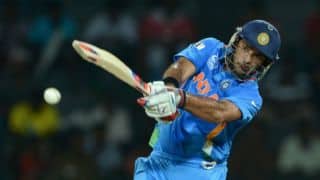