IPL and controversy continue to walk hand in hand

IPL and controversy continue to walk hand in hand

Kohli, Dhoni, Pollard, and a number of other cricketers have been involved in varying levels of controversies.

Kolkata: From match fixing allegations to ugly on-field brawls and a love-struck cricketer breaching rules to meet his sweetheart: the ongoing edition of the multi-million dollar Indian Premier League (IPL) has drawn the spotlight as much for controversies as for cricketing exploits. IPL 2015 Highest run-scorer: List of best batsmen in IPL 8

Since its inception eight years ago, the cash-rich IPL has been hailed for bringing forth new and exciting talent or resurrecting many a fledgling career. But simultaneously, it has derived bad publicity for a host of unsavoury events over the years that included spats between team owners to the unceremonious sacking of its creator Lalit Modi.

Season 2015 is no exception. One of the most popular and successful IPL franchise, the Mahendra Singh Dhoni-led Chennai Super Kings (CSK), found themselves under the Enforcement Directorate (ED) scanner when the agency sought details regarding the undervaluation of the franchise.

As part of the process of former Board of Control for Cricket in India (BCCI) boss N Srinivasan distancing itself from CSK, owned by his company India Cements Ltd., following a Supreme Court order citing conflict of interest, the India Cements proposed to transfer control of the franchise to a trust, at only Rs.5 lakh. IPL 2015 Highest wicket-taker: List of best bowlers in IPL 8

According to an estimate, CSK pays Rs.40 crore as annual franchisee fee and spends over Rs.60 crore on players’ remuneration every year. The BCCI has now sought legal opinion on the issue. Spelling more trouble, Modi made a sensational claim that at least four CSK players were involved in match fixing.

Referring to the Justice Mudgal Committee which has submitted its report on IPL spot fixing to the Supreme Court, Modi earlier in the month tweeted: “So here is my BREAKING STORY – IF THE #HONORABLE #SUPREME #COURT WAS TO REVEAL THE NAMES OF PLAYERS INVOLVED IN FIXING – at least 4 are CSK.” Modi also claimed that “9,000- 10,000 crore of rupees per game” was being cast as bets in the IPL. IPL 2015 Most 6s and 4s: List of most dangerous batsmen in IPL 8

The fixing demon again haunted the tourney when Rajasthan Royals disclosed that one its cricketers was approached for fixing by a player not part of the IPL. Royals’ chief executive officer (CEO) Raghu Iyer claimed the approached player refused the offer and informed his team management, who in turn reported the matter to BCCI’s Anti-Corruption and Security Unit (ACSU).

Earlier, the defending champions created a flutter even before a ball was bowled in the tourney by threatening a pull out if star spinner Sunil Narine was not allowed to play. Narine was earlier banned by the BCCI and not allowed to play for KKR in the 2014 Champions League Twenty20 final after being reported for a suspect action.

Eventually cleared by the BCCI after undergoing biomechanical tests in Chennai at the start of the ongoing IPL, he was again barred from bowling his off-spinners. Subsequently cleared after another biomechanical test, the mystery spinner failed to live up to the expectations as the Gautam Gambhir-led side crashed out of the competition.

Known for his power hitting, Knights’ opener Robin Uthappa came under fire after he allegedly held Royal Challengers Bangalore (RCB) youngster Sarfaraz Khan “by the collar.” While match referee Javagal Srinath denied receiving any complaint, Gambhir called it “not a major issue” and which “happens with a lot of people.” IPL 2015 most dismissals by wicketkeeper: List of best wicketkeeper in IPL 8

It may not be a controversy in the strict sense, but Mumbai Indians all-rounder Kieron Pollard did attract many a frown when he literally put a tape on his mouth after an umpire asked him not to talk too much with compatriot and RCB opener Chris Gayle at the packed M. Chinnaswamy stadium in Bengaluru.

While the ACSU protocol states that players can’t meet any non-accredited personnel when the match is on, Kohli met his actress beau in the stands at the M Chinnaswamy Stadium during a rain-induced halt. The duo were seen on the giant screen at the stadium and the host broadcaster too cashed-in on the visual treat to relay it to households. He was later let off by the BCCI which saw the incident as a “minor digression.” Indian Premier League (IPL) 2015: Complete coverage 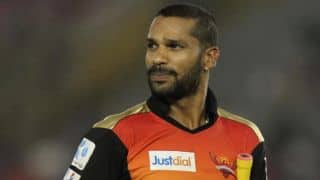 Anamul Haque confident of putting up good show against India