Parthiv went on to add that the former India captain was always clear as to what he wanted from his players. 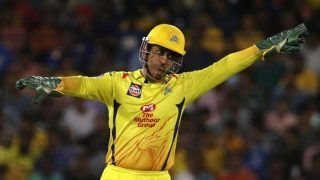 India’s veteran wicketkeeper-batsman Parthiv Patel gave an insight into former India captain MS Dhoni’s mind as he shared his experience of playing under the stalwart during his initial years with IPL franchise Chennai Super Kings (CSK). Parthiv played for CSK till 2010 and admits to have learnt plenty from sharing the dressing room with some of the greats of the game.

During an interaction on Star Sports show IPL Finals, the 35-year-old Parthiv, who was part of the Chennai unit during the first edition of the IPL recalled how Dhoni’s team meetings never lasted more than a couple of minutes. Parthiv scored 302 runs from 13 matches as CSK made it to the final, which was to be played against Rajasthan Royals.

Despite playing for several other franchises through his IPL tenure, the Ahmedabad-born cricketer is certain nothing has changed about Dhoni and his captaincy in all these years.

Parthiv went on to add that the skipper was always clear as to what he wanted from his players. “Dhoni was always clear about his team combinations and the role each player had to play in the squad. The RR team in the 2008 season played like a group of 11 players. It was never a team of individuals and that is why we took them seriously. They were never the underdogs.”

Parthiv has spent a season each for the now-defunct Kochi Tuskers Kerala and Deccan Chargers, along with Sunrisers Hyderabad and Mumbai Indians. He played for Royal Challengers Bangalore in 2014 and returned to the franchise for his second run in 2018.

“I learned a lot in 2008 from watching players like Hussey, Fleming, and Hayden, how they get ready for big matches and how they prepare,” Parthiv said.

“IPL has changed a lot. There are more tactics, analytics and strategies. We used to aim for 30 to 36 runs in the last 5 overs of batting. Now scoring 50 to 60 runs in the last five overs of the first innings is the new normal.”

COVID-19 Crisis: ECB Delays Start of Domestic Season Till August But Windies Series in July Likely to go Ahead