AB Villiers will now have to undergo a mandatory quarantine period of seven days. Chennai: South Africa legend AB de Villiers has arrived in Chennai to link-up with his IPL franchise Royal Challengers Bangalore. De Villiers has entered the team bio-bubble but will first have to undergo a mandatory quarantine period of seven days before joining his team members and start outdoor training for the season which is slated to get underway from April 9.

RCB have been scheduled to play the season opener against defending champions Mumbai Indians in a blockbuster encounter that will pit Virat Kohli against Rohit Sharma at Chennai’s Chepauk. The official Twitter handle of RCB shared a couple of pictures early Thursday morning announcing the arrival of De Villiers.

“BREAKING THE INTERNET: The spaceship has landed! AB de Villiers has joined the RCB bubble in Chennai,” RCB posted alongside the pictures of De Villiers and his luggage.

The spaceship has landed! ?

Meanwhile, RCB captain Virat Kohli is also expected to enter the team bubble later in the day. Unlike a majority of his India teammates who straightaway hopped from one bubble to another following their ODI series win over England in Pune, Kohli left for his home to spend time with his family.

Kohli has been part of several bubbles since August last year when he flew to UAE for IPL 2020 before landing in Australia for three ODIs and as many T20Is. He then returned home after playing in the first Test of a four-match series against the hosts to be with his pregnant wife before re-joining his India teammates in Chennai as they hosted England four four Tests, five T20Is and three ODIs from the first week of February.

“Scheduling needs to be looked at in future, because playing in ‘bubbles’ for so long, two to three months, is going to be very, very difficult going forward,” Kohli had said after the tour concluded with India pocketing the ODI series 2-1.

RCB bowling duo of Yuzvendra Chahal and Mohammed Siraj had joined the camp on Monday itself. 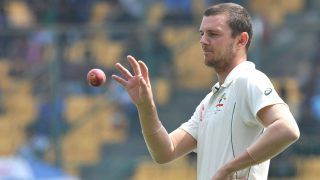