Statistical highlights of the second play-off match of the IPL between Mumbai Indians and Royal Challengers Bangalore. 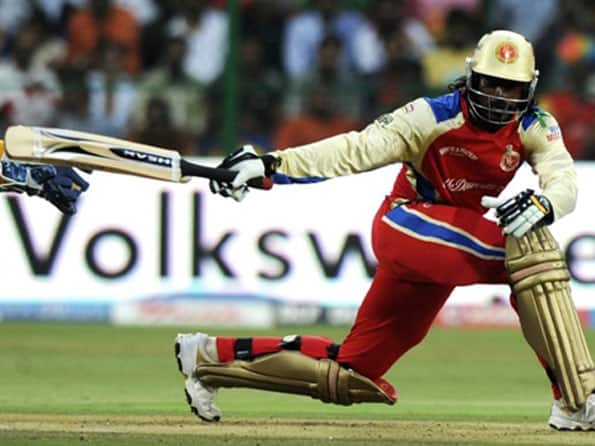 Statistical highlights of the second play-off match of the IPL between Mumbai Indians and Royal Challengers Bangalore.

# Gayle and Badrinath are the only two batsmen to have recorded five innings of fifty-plus in the present competition.

# Gayle’s average of 76.00 is the highest among the three players with 600 runs or more in an IPL tournament.

# Gayle has recorded 44 sixes, extending his tally in the IPL four.

# Chris Gayle has been adjudged the Man of the Match for the sixth time – the most by a player in an IPL tournament.

# Royal Challengers Bangalore (185/4) have posted their highest total against Mumbai Indians, bettering the 166 for five at Mumbai on April 20, 2008.

# Mayank Agarwal and Chris Gayle have recorded 27 runs in the first over off Abu Nechim Ahmed – the most in the opening over of a match in the IPL history.

# Gayle’s 89 off 47 balls is the highest by a Bangalore player against Mumbai in the IPL, outstripping the 69 not out by Jacques Kallis against Mumbai at Johannesburg on May 3, 2009.

# Bangalore became the first team to register 90 sixes in the fourth edition of the IPL.

# Under Daniel Vettori’s captaincy, Bangalore have won eight and lost four out of twelve played in the IPL – success per centage 66.66.

# Mayank Agarwal and Chris Gayle put on 113 – Bangalore’s highest for the opening wicket against Mumbai in the IPL, eclipsing the 85 between Jacques Kallis and Manish Pandey at Brabourne Stadium, Mumbai on March 20, 2010.

# Gayle figures in all three century partnerships for Bangalore in the IPL 4 – the previous two being 123 for the first wicket with Dilshan against Kolkata at Kolkata on April 22, 2011.

# Of the four century partnerships in the IPL overall, Bangalore have posted three in the present edition – one each against Mumbai, Kolkata and Punjab.

# Bangalore have recorded their fourth win in nine matches against Mumbai Indians in the IPL – winning per centage 44.44.

# Ambati Rayudu has recorded his second duck in Twenty20.