Australia's whitewash in the three-Test series against Sri Lanka has put James Sutherland, Cricket Australia CEO, in a spot of bother.

Australia‘s whitewash in the three-Test series against Sri Lanka has put James Sutherland, Cricket Australia CEO, in a spot of bother. Sutherland wants to know why the team’s performance, after being No. 1 before the series, drastically scaled down within a few weeks. In addition, their overall performance in Asia has been abysmal. In 2013, they had suffered a whitewash against India, and then were thrashed by Pakistan in UAE. From No. 1 position, they are now placed at No. 3, with India and Pakistan ahead of them. Australia are now playing a five-match One-Day International (ODI) series against Sri Lanka, leading 1-0. FULL CRICKET SCORECARD: Sri Lanka vs Australia 2016, 2nd ODI at Colombo

“If you have a look going back in time over recent years, some of our Test cricketers are playing more in India than they’ve ever played before. They’re used to subcontinental conditions through their experiences in the IPL and on other tours representing Australia. These are conditions we are more familiar with perhaps than we have been in decades gone by, and it comes back to the ability to adapt. That’s something I’ll be interested to hear more about,” Sutherland told ESPNCricinfo.

He emphasised on the team’s ability to get accustomed with conditions. “It’s probably a whole lot of different things. The critical thing is adaptability to conditions and that’s what we ought to understand better. Clearly conditions here are very different to England, which are very different to what we see on the subcontinent, and to be the best team in the world, to be the No. 1 team, you need to be able to win away, and that’s what we’re about.”  Also read: Mathews blames middle-order collapse for defeat

He agrees that they did not lack in preparation but a review will help them analyse why they failed in the Test series. “We’re certainly disappointed with the performances of the team in this Sri Lankan series and the review will tell us more but I don’t think we can complain in terms of the preparation we had over there in Sri Lanka.” 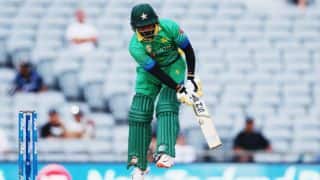