The IPL auction is set to take place in Bangalore and eight franchises will take part.

30-year-old pace bowler Mohammad Azharullah gained recognition in 2013 during a fairytale summer in which he was plucked from local club cricket and signed up by Northamptonshire.

The decision paid dividends for both county and player as he played a major role in his side winning the Friends Life Twenty20 (20), claiming 27 wickets and ending the tournament as leading wicket taker. The success has potentially given him the opportunity to play on the biggest domestic T20 stage of all, as it was recently announced that Azharullah will be included in the Indian Premier League (IPL) auction due to take place on February 12th in Bangalore.

The timing of the IPL has caused some angst to the England and Wales Cricket Board (ECB) in the past with the T20 tournament clashing with the first half of the County Championship season and the counties too have generally been reluctant to allow their players to take part.

However, in exclusive remarks to Shayan Siddiqui of PakPassion, Azharullah was full of praise for the support his team Northamptonshire have given him and outlined the process he went through to sign up for the auction.

“I’ve been fortunate that Northants have been fully behind me and encouraged me to go and play in the IPL. They feel it will be a good experience for me and that I’ll comeback a better player. I feel that it will therefore be beneficial to Northants in the long term. With respect to the actual process, after a date is announced for the auction, you need to get permission from your club so they can make the necessary adjustments to your contract. I then passed the application on to the ECB who then registered me. So, I’ve got my name in there and InshAllah [God-willing] there’s always a chance of getting picked.”

Although the glitz and glamour of the IPL is one of its attractions, the fact that it showcases the best players from all over the world is undoubtedly one of its key selling points.

Playing alongside and learning from the best in the business can prove very valuable to any player and Azharullah is no different “The IPL is the biggest domestic event in the cricket calendar as the cream of the crop goes to play there. I’ll have a wonderful opportunity to test myself and prove myself against the best players in the world. Everyone watches the IPL, with it being such a star-studded event, so I’d love to be a part of it. There’s no particular team I’d prefer to play for, I’ve watched a lot of the Kolkata Knight Riders in the past as they had a good team.

To a certain extent you could say I’d like to meet Shahrukh Khan but the main purpose is cricket!”

In addition to Azharullah, Northants have allowed Steven Crook and their overseas player Jackson Bird to enter the IPL auction. If all three are signed up by the franchises resulting in them missing the first half of the season, it could seriously dent the county’s chances of retaining a place in Division One of the County Championship. Azharullah, however, is confident that Northants have the bench strength to make up for his loss and that a stint in the IPL can give him the experience to win more trophies for his county in the future.

“Northants have taken a calculated decision by allowing me the opportunity to play in the IPL. We have a lot of depth in our squad and we’ve just recently signed another fast bowler, Maurice Chambers from Essex. If I’m not there it will give others an opportunity so there are always positives to look for. For example, if I get a chance in the IPL and gain some experience from there it will give Northants an advantage in the T20 tournament in England.”

Azharullah spent a number of years playing club cricket in England and had to bide his time before being eligible for a county spot. In that respect he has had a rapid rise with a domestic title to his name and a chance of being part of the biggest domestic tournament in the world. He certainly isn’t finished yet and aims to continue to grow as a cricketer and prosper in the coming years.

“The target is to simply keep on going while I have the energy. I want to continue to play better and better cricket, as cricket is my only passion and it’s everything for me. I’d like to be as successful as possible for Northants and do the same if I get an opportunity to play in the IPL” he concluded. 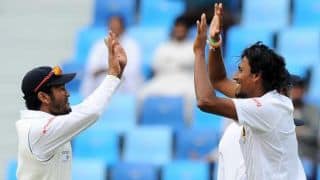