Impressed with leg-spinner Mayank Markande‘s bowling for Mumbai Indians (MI) in the IPL, former India spinner Venkatapathy Raju praised him and termed control as the rookie’s strongest point while also describing Sunrisers Hyderabad as having the best bowling attack. Punjab-born Markande has been the find for defending champions MI this Indian Premier League (IPL) season and has bowled well in all games after making a fantastic debut picking three wickets, which included the prize scalp of Mahendra Singh Dhoni, albeit in a losing cause in the lung-opener against Chennai Super Kings.

“Markande, the main thing is (his) first year (and the) first match and they (MI) made him play which itself shows the talent he has. You have seen a lot of youngsters come in and they sit (out) for a year, then they are put in,” Raju told PTI during an interaction. “That’s why Markande, Mujeeb (Ur Rahman of Kings XI Punjab) and all – straightaway they are making them play – that means they are special,” the 48-year-old former spinner said.

Raju, a Star Sports expert, is doing commentary of the IPL games in Telugu, aired on Star Maa Movies. “(MI captain) Rohit Sharma is using him as a strike bowler and he has been picked up (chosen) to pick wickets and he has been doing that. And that’s the talent we have and (it) is going to be a headache for the (national or state) selectors, which is fantastic headache,” he said. “This season we have seen a lot of leg spinners, wrist spinners coming in, which is a huge revelation. They will be hit once a while, but you can’t just take them away and they are coming back strongly. Wrist spinners are wicket-taking bowlers,” Raju said.

Asked about Markande’s stock delivery, he said, “The strongest point for him is control at that age. Showing no fear seeing who the opponent is or who the batsman is, he is just going about his bowling and that little variation. The speed and length of what he is bowling is amazing.” On SRH attack, Raju, who played 28 Test matches, said, “It (SRH) is (the best bowling attack) in this IPL. They are defending their totals, they are planning and so far they are the best.”

“Bhuvaneshwar (Kumar) has been doing well for the last five-six seasons. He is the most experienced and a thinking bowler. He being there, a lot of players are learning. Siddarth Kaul is (also) bowling brilliantly,” he said. “But the advantage the SRH have is even if Bhuvi is not playing , you have”Sandeep Sharma. He has got the knuckle ball and bowls good yorkers,” said Raju, who also played 53 ODIs for India.

He also lavished praise on Rashid Khan, saying the Afghanistan leg-spinner has got natural talent and variations. “If you see the present Sunrisers Hyderabad team, the bowling attack is fantastic. And you have got Basil Thampi and Rashid Khan. I have been seeing Rashid Khan right from U-19 level. “I have seen enough of Rashid and Mujeeb, the way they bowl is amazing. They have got natural talent and variation and they have got (Mohammad) Nabi too,” Raju said. 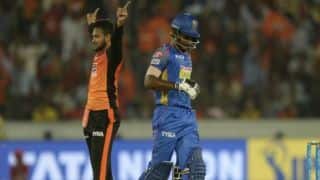 IPL 2018: CSK will have to work hard on Pune pitch to be a force to reckon, says Stephen Fleming