New batsman Manpreet Juneja alongside Dhruv Raval remained unbeaten, taking Gujarat to lunch at 81 for 3 on Day One of Irani Cup.

Gujarat, title holders of Ranji Trophy 2016-17, tried to continue their momentum against Rest of India. However, they lost three wickets in the first session, of Day One of the Irani Cup 2016-17 at Brabourne Stadium in Mumbai. Although they lost an early wicket of leading run-scorer Samit Gohel in Ranji Trophy, Priyank Panchal and Dhruv Raval stitched a 55-run partnership for second wicket to help Gujarat salvage from the early loss. Meanwhile, Pankaj Singh, Mohammed Siraj and Siddharth Kaul continued to add pressure on the batsmen. However, Panchal continued his good form and provided speedy recovery for Gujarat. Pankaj provided the second major breakthrough for ROI, with Panchal perishing for 30, while Kaul got the third wicket of Parthiv for 11. New batsman Manpreet Juneja, along with Raval remained unbeaten, taking Gujarat to lunch at 81 for 3.

On a foggy morning, Gujarat opted to bat, making use of the pitch conditions that favoured the batsmen. Gujarat made four changes for the Irani Cup. Top-order batsman Bhargav Merai was dropped due to injury, with Mohit Thadani making an entry. RP Singh, who took 4 wickets in final, was dropped along with Rush Kalaria and Rujul Bhatt. Ishwar Choudhary, who has played for Gujarat in the 2014-15 Ranji season, came back to the side. Dhruv Raval was back for his third First-Class game. Off-spinner Karan Patel was called in to the squad for his fourth game.

As for ROI, Shardul Thakur has been rested due to ankle injury and Mohammed Siraj was called to add weight to the bowling unit. Saha was back after prolonged injury, along with Karun Nair, with Cheteshwar Pujara as their leader.

Pankaj, with 42 wickets from Ranji 2016-17, began the attack for ROI and was spot on with an in-swinger, grabbing the big gun Gohel for a golden duck at the start of the game.

Gujarat got their first boundary in the 6th over, with Raval following the suit in the next. Taking advantage of the batting-friendly pitch, Panchal smashed back-to-back boundaries in the 8th over, taking Pankaj for a ride.

Raval and Panchal then continued the run-flow, taking their partnership to 50 runs by 15th overs. To keep Panchal and Raval on toes, Siraj tried to bowl round the wicket, which did not work the magic on ROI. However, Pankaj and Siraj gained some maiden overs slowing down the run rate.

Pankaj found his way back in the game. He gained his second wicket, picking Panchal for 30, comfortably caught by Nair at the first slip. That broke the 55-run partnership for second wicket. At No. 4 entered Parthiv.

It was Kaul’s turn to provide yet another breakthrough, and this time a big wicket of captain for 11. 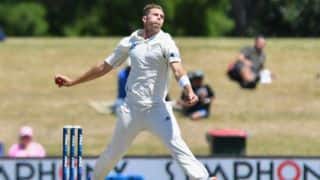 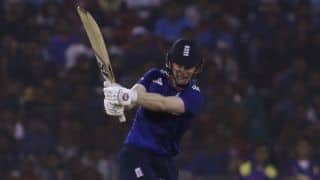