Nagpur: Vidarbha  reduced Rest of India to 236 for six wickets in their first innings after declaring their first innings at a mammoth total of 800 for seven on the fourth day of the Irani Cup in Saturday. Vidarbha’s expansive total was supposed to deny the match a win/loss result but medium pacer Rajneesh Gurbani‘s four wickets for 46 runs powered the Ranji Trophy winners to sniff a win as RoI trail by 564 runs.

Anyway a draw will only mean Vidarbha taking the title due to the bigger first innings total rule. Vidarbha will hope to go for the win by bowling out RoI early in the first session on Sunday and ask them to follow-on. Gurbani & Co had reduced RoI to 98/6 but the unbeaten 138-run stand between Hanuma Vihari (81 not out) and Jayant Yadav (62 not out) saved them to some extent.

Gurbani snared opening batsman Ravikumar Samarth (0), captain Karun Nair (21), Srikar Bharat (0) and Ravichandran Ashwin (8) as he continued his impressive performances of this domestic season. Karnataka star Mayank Aggarwal (11) fell against India paceman Umesh Yadav, while medium pacer Aditya Thakare bagged the wicket of Mumbai prodigy Prithivi Shaw (51), who was RoI’s third wicket to fall in the innings with 77 runs on the board.

Earlier in the day, Vidarbha, resuming play at the score of 702/5, saw overnight batsman Apoorv Wankhade getting the run that gave him the three-figure mark. Wankhade remained not out on 157 until his side declared.

Wankhade was the third batsman of his team to get to the three-figure mark. Veteran Wasim Jaffer had scored a marathon 286, while Ganesh Satish contributed 120 runs in Vidarbha outbatting the opponent.

Overnight batsman Aditya Sarwate (18) and Wakhare (0) were the two wickets to fall for Vidarbha in the day. Gurbani was not out on 22 as he joined Wankhade for an unbeaten partnership of 64 runs for the eighth wicket. 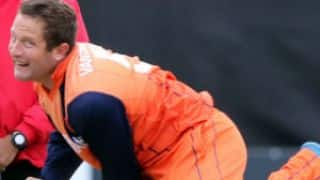 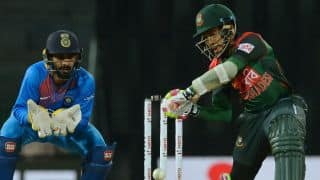