Wasim Jaffer s 113*, coupled with Faiz Fazal and Sanjay Ramaswamy s fifties, powered Vidarbha to a strong start on Day One of Irani Cup 2017-18 at Vidarbha Cricket Association Stadium, Nagpur. A power-packed performance from the top order saw Vidarbha finish the day at 289 for 2. Electing to bat, Vidarbha s openers made complete use of a batting friendly pitch by putting up a century stand for opening wicket. Rest of India (ROI) claimed the openers just before lunch and before tea, but that was it.

Ramaswamy brought up his sixth First-Class fifty. A rash shot off Jayant Yadav saw his partnership with Fazal end on 101. Fazal, on the other hand, got to his seventh century in the current season, till Ravichandran Ashwin struck in his 22nd over. Fazal s 190-ball 89 included 6 fours and a six.

Unfazed by the fall of wickets, Jaffer went on to break records. He became the second batsman (after Gundappa Vishwanath) to score 6 consecutive fifty-plus scores in Irani Cup and registered the highest career score in Irani Cup history. He then went on to slam his 53rd First-Class century taking the spinners Ashwin and Shahbaz Nadeem for a roll.

In the process, he also brought up a fifty-run stand with Ganesh Satish (29), who played a perfect second fiddle. The duo will enter Day Two with an unbeaten third-wicket stand of 71. 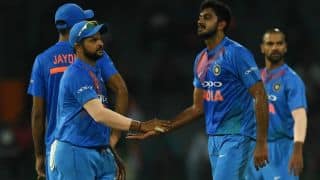 India vs Bangladesh, 5th T20I Nidahas Trophy 2018, Live Streaming, Live Coverage on TV: When and Where to Watch