Vihari also became the first batsman since Shikhar Dhawan in 2011 to score hundreds in each innings of the Irani Cup.

While the Irani Cup encounter between Rest of India (RoI) and Vidarbha hangs in balance, Hanuma Vihari (180 not out), with some important contributions from skipper Ajinkya Rahane (87) and Shreyas Iyer (61 not out), on Friday made sure that RoI has a chance to win the title despite conceding the first-innings lead against the defending champions. (ALSO READ: ‘What’s the point in playing the Irani Cup when the Ranji Trophy is just over?’)

Vihari, meanwhile, etched his name in the record books after he, with his second hundred in the match, became the first batsman to score a hat-trick of hundreds in the Irani Cup.

Vihari, who remained unbeaten on 180 in the second innings, was RoI’s highest run-getter in the first innings, scoring 114 to guide his team to 330 at the Vidarbha Cricket Association Stadium in Nagpur. (ALSO READ: Irani Cup: Hanuma Vihari, Mayank Agarwal form bulk of Rest of India’s 330)

A calm and composed century for @Hanumavihari against Vidarbha. Rest of India are now 283/7 on Day 1 of the #IraniCup #ROIvsVID

The right-hander had scored a hundred (183) for Roi during the last year’s Irani Cup clash against Vidarbha. Vidarbha had won that encounter on the back of a big first-innings total of 800, with Wasim Jaffer scoring 286.  (ALSO READ: Irani Cup, Day 3: Akshay Karnewar’s 102 helps Vidarbha gain upper hand over Rest of India)

With his twin hundreds in this year’s Irani Cup clash, Vihari became the first batsman since Shikhar Dhawan in 2011 to score centuries in both the innings of the Irani Cup clash. Dhawan had scored those twin tons against the then Ranji Trophy champions Rajasthan. 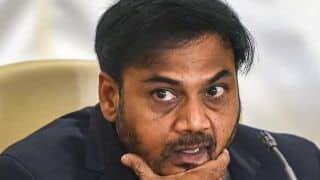 We have shortlisted 18 players and will rotate them: MSK Prasad on India’s World Cup 2019 plans