Thompson last featured for Ireland national side in February 2016

Ireland all-rounder Stuart Thompson has taken an indefinite break from the game, after suffering anxiety from his poor performances. Thompson has represented Ireland in 11 One Day Internationals (ODIs) and 17 T20 Internationals (T20I). He last featured for his national team in February earlier this year. He was currently plying his trade with North-West Warriors in the domestic championship. Thompson was not a part of the Ireland squad which hosted Sri Lanka for two ODIs recently, and neither a part of T20 World Cup squad, where his team surprisingly failed to win a game in the qualifying group. ALSO READ: Test cricket’s newest nations in despair

Speaking about his decision, cricbuzz quoted Thompson say, “I have realised it is in my best interests and everyone else involved in the squad and Cricket Ireland to be open and honest about my situation. I have been struggling this season which culminated in needing a complete break from the game.”

“With the backing of Cricket Ireland, I have received expert help and I now understand a lot more about my condition and how I can overcome it. I am now looking forward to practising methods to manage my anxiety and hope to return to cricket very soon. I’ve the best team around me to help me through it and looking forward to the challenge ahead,” he added.

His decision to take indefinite break was backed by performance director of Cricket Ireland, Richard Holdsworth. “Stuart is getting expert support which we are confident will get him back in the game soon. Stuart will continue to take a break from the game but hopes to be back very soon.” 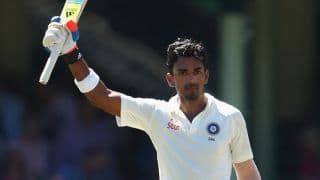 KL Rahul: Anil Kumble wants Indian players to take decisions on their own