Ireland captain William Porterfield has lamented the lost opportunity against Afghanistan in the one-off Test which they lost by seven wickets in Dehradun on Monday. (READ: Afghan basks in historic day for Afghanistan cricket)

Pointing out where Ireland went wrong, Porterfield said it was the failure to put up a good total in the first innings after winning the toss on a slow track that left them playing catch up.

Ireland were bowled out for 172 in their first innings which was largely due to a rearguard from No. 11 Tim Murtagh who hit a maiden Test fifty to push them out from the depths of 85/9.

In reply, Afghanistan were bowled out for 314, ensuring a 142-run lead. In the second dig, Ireland fared much better with Andrew Balbirnie and Kevin O’Brian hitting half-centuries in a total of 288. The Asghar Afghan-led Afghanistan knocked off the target the target of 147 with seven at the cost of three wickets for their first ever Test win.

“We know it’s going to be attritional cricket and we have to apply ourselves more,” Porterfield was quoted as saying by Belfast Telegraph. “We put some pressure on them with our second dig but we had to bat better in the first innings. We needed a minimum of 300 and they didn’t even bowl as well as they could, yet it needed Murt’s (Tim Murtagh) batting to get us to 170. Moving forward, it highlights how ruthless we have to be, especially on slow pitches.”

Ireland were at the receiving end of a couple of contentious calls and Porterfield advocated the usage of Decision Review System (DRS) which was absent from their tour of India where they also faced Ireland in three T20Is and five ODIs before the lone Test.

“It would be great to have DRS as standard across the board. Would it have been different? Yes, because things may have been overturned, but umpires go out there to do their best. They make mistakes, as do players, we’re all human. It’s the same for both sides, but it comes down to financial implications. If it’s accessible, though, use it,” he said. 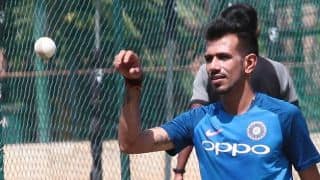