Big-hitting Kevin O'Brien holed out to Kieren Pollard at long-on off Darren Sammy for 5 as Ireland stutter in their World Cup Group B match at the Punjab Cricket Association Stadium in Mohali. 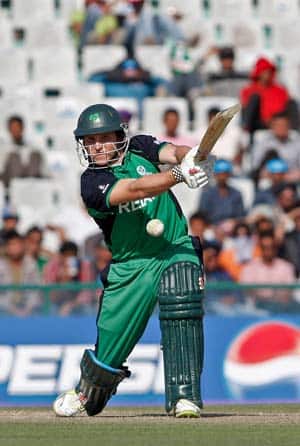 Big-hitting Kevin O’Brien holed out to Kieren Pollard at long-on off Darren Sammy for 5 as Ireland stutter in their World Cup Group B match at the Punjab Cricket Association Stadium in Mohali.

O’Brien’ dismissal came moments after Ed Joyce fell for a well-compiled 84 and Ireland now have their backs to the wall in pursuit of West Indies score of 275. Joyce was bowled by debutant Andre Russell.

Sammy grabbed one important scalp when he trapped Gary Wilson lbw for 61 and made Ireland’s task of chasing down West Indies’ score a herculean one.

Earlier, Joyce provided spark to the Ireland innings after they lost their openers cheaply. He was confidence personified from the outset, straightway taking on Benn picking him for two fours after the latter had Paul Stirling caught behind in that same over a sweet revenge for him after Stirling had banged him over mid-off for a boundary two balls before.

Joyce strung two useful partnerships 44 with Niall O Brien and 91 with Gary Wilson and it ensured the innings got the much needed platform for the latter batsmen.

Captain Darren Sammy bowled a frugal spell, bowling three maidens from his first five overs and his accuracy was rewarded when he removed Porterfield for 12.

West Indies position was further consolidated by Benn when he bowled O Brien for 25, giving the bowler his second scalp.

Preview: India and South Africa lock horns in the city of oranges