Ireland qualified for their third successive ICC World Cup after their World Cricket League Championship match against the Netherlands ended in a sensational tie in Amstelveen. 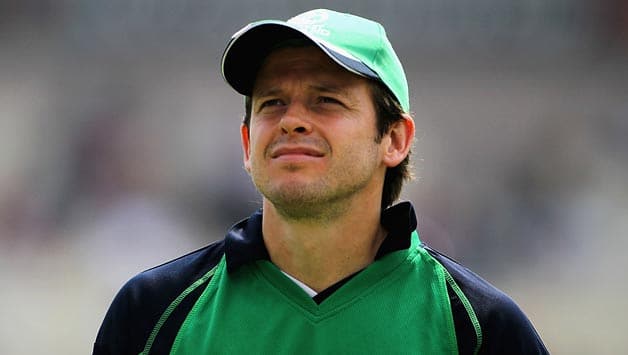 Ireland qualified for their third successive ICC World Cup after their World Cricket League Championship match against the Netherlands ended in a sensational tie in Amstelveen.

The home side’s number-nine batsman Michael Rippon hit a four and a six from the final two deliveries off John Mooney to snatch a point for his side, but couldn’t stop Ireland from winning the championship and progressing to ICC’s flagship event that will be staged in Australia and New Zealand in 2015.

Earlier, half-centuries by Ed Joyce (96*) and Niall O’Brien (50), and an equally good knock by Paul Stirling (49) helped Ireland to score 268 for five from 50 overs, after they had elected to bat first on Tuesday.

In turn, the Dutch started confidently through Wesley Barresi (46), Eric Szwarczynski (44) and Stephan Myburgh (35), and reached 135 for one before slipping to 142 for four. A rearguard action by Daan van Bunge (45) and Tom Cooper (38) brought the Netherlands within touching distance when they needed 16 off the final 12 balls.

Alex Cusack conceded three runs in the penultimate over of the innings and Mooney started the final over impressively by giving away just two runs off his first four deliveries.

However, at this stage, Rippon gatecrashed the Irish party when he hit a four and a six off the final two deliveries to earn a valuable point for his side. This point may go a long way in helping the Netherlands to become the second side from this tournament to qualify for the World Cup.

After Tuesday’s result, Ireland have moved to 20 points, with nine wins from 12 matches. The result also makes Ireland the first of four qualifiers for the World Cup.

There is still one place up for grabs from this tournament with four sides Scotland, the Netherlands, Afghanistan, and the United Arab Emirates (UAE) all still capable of claiming the second position.