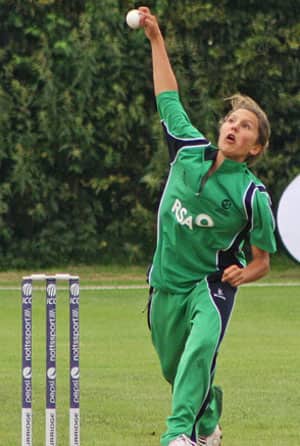 She made her ODI debut on August 17 against Netherlands at Utrecht at the age of 13 years and 274 days playing in the ICC European Women’s Championship, the International Cricket Council said on its website.

Tice made her international Twenty20 August 15 against the same opponent in the ICC European Women’s Championship.

The youngest ever cricketer in both categories is Sajjida Shah of Pakistan women’s team. She made her debut at the age of 12 years and 271 days against Ireland in July 2000.

“Well I suppose I was introduced to cricket at a very young age, spending endless hours in the garden bowling to my dad and my two older brothers,” said Elena who was unaware that she was the second youngest international cricketer ever.

“My brothers and my dad always encouraged me to play. When I was six years old, I lived in Vienna for three years, where I played for the Austria Cricket |Club. I had a great Sri Lankan coach there called Siva Nadarajah. Both Siva and my dad (George), taught me how to play and that is where the interest really started. I moved back to Ireland when I was nine and attended Aravon School where my enthusiastic headmaster, Kevin Allwright, brought me on in school cricket and introduced me to Merrion Cricket Club where I now play all my club cricket,” recalled Elena.

Elena was a medium-pace bowler in her earlier years, but turned to spin quite by chance.

“Up until the beginning of this season, I bowled medium pace. However, I was suddenly converted to leg-spin when I realised I was better at it! I had practised it a little bit in the corridor of my house in the winter months with my brother. Mind you, all my coaches always told me it was a terrible idea but eventually I convinced them otherwise after joking around in the net when they realised I was kind of good at it. I have had to work hard this season in club cricket but everyone has been really supportive,” said Elena.

Talking about her international debut, she recalls, “One of the selectors informed me by phone. I was surprised and it took a while to sink in.”

“Inspite of being the youngest, they were all really nice to me and it didn’t take me long to settle in. Everyone has been really supportive, especially my coaches, in both the club and Irish squad, who have really worked hard with me. No one has ever made me feel too young to do it.”

Her ultimate dream is of a repeat of what happened at Bengaluru during ICC Cricket World Cup 2011 when Ireland beat England. “My dream is to play in the World Cup and to have another Bangalore experience (beat England!),” stated Elena.

Wade to replace Paine as Australia's No.2 'keeper