Ireland face off against Bangladesh in Gorup A Round 1, Match 8 of the ICC World T20 2016 at Dharamsala.

Ireland face off against Bangladesh in Gorup A Round 1, Match 8 of the ICC World T20 2016 at the Himachal Pradesh Cricket Assiciation (HPCA) Stadium in Dharamsala on Friday. Ireland, who have had a pathetic start to the tournament, suffered a shocking defeat in their opening and only game so far, as they lost to Oman by three wickets, in the match of the tournament so far, and would aim to turn things around in this tie toi stay alive for Super 10 contention. Bangladesh, on the other hand, who narrowly won by eight runs against Netherlands would look to come up with an improved performance, and win the tie, in order to progress through the Super 10. LIVE CRICKET SCORECARD: Bangladesh vs Ireland, Group A Round 1, ICC World T20 2016, Match 8 at Dharamsala

Therefore, going by the performance in the previous game, the teams are likely to make a couple of changes, as for Bangladesh, it could well see changes, especially in the bowling department, with Arafat Sunny or Taskin Ahmed being replaced by Abu Hider, while Mahmudullah too could miss out and could well be replaced by Mohammad Mithun or Nurul Hasan. As for Ireland, changes too are possible in the bowling department, as Tim Murtagh is most likely to miss out, and being replaced by Stuart Thompson. LIVE CRICKET UPDATES: Bangladesh vs Ireland, Group A Round 1, ICC World T20 2016, Match 8 at Dharamsala

With the game being held at Dharamsala, and the contest being a night affair, it is most likely to remain a batting assisted track, with dew factor coming into play at night. Thus the team winning the toss is most likely to bat first and would go with a strong batting dominated side. 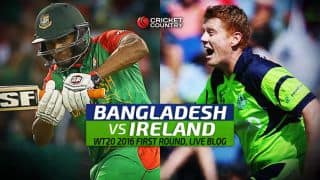