The sixth ODI between Ireland and Scotland was abandoned due to rain.

The sixth and final One-Day International between Ireland and Scotland  has been abandoned due to rains, without a single ball being bowled. Ireland have been declared the winners of the tri-series, as they finish with five points with Afghanistan being the other team. Both teams have been awarded one point each. Afghanistan, who won two and lost two finish as runners-up. Scotland just managed one win and therefore finish at the bottom of the table. Earlier, Ireland had won the toss and elected to field.

Peter Chase made his debut for Ireland in this game, but unfortunately could not take the field or bowl even a single delivery. This has been a well-contested series, with all three teams contesting the matches in a great spirit. Ireland, having won the series will take their momentum into the upcoming ICC World Cup 2015.

Scotland started peaking at the right time as they managed to get a big win over Afghanistan in the previous game and would have loved to have a go at Ireland in the final game, but couldn’t. Both Scotland and Ireland have played two World Cups and Afghanistan will be making their debut in the mega tournament. Afghanistan can be proud of the way they have performed in the series and they will look to take the positives from the series into the World Cup.

The three minnows will look to cause some upsets in the ICC World Cup 2015 and if they are successful, the World Cup will turn out to be an exciting tournament. Mark Sorensen will replace Tim Murtagh for the World Cup after the latter had to pull out due to an injury. 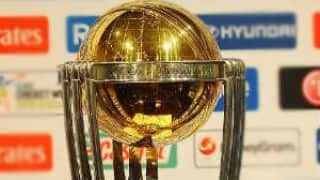