Ireland were bowled out for a paltry 117, with Alisdair Evans taking four wickets.

Ireland were handed a massive 179-run drubbing when they were bundled out for a total of 117 in 27 overs during their ICC Cricket World Cup 2015 warm-up encounter against Scotland at the Blacktown Olympic Park Oval in Sydney on Tuesday. Alisdair Evans was the chief destroyer of the Ireland batting line-up, removing four top-order batsmen while conceding a meagre 17 runs off five overs as Ireland, who were  collapsed spectacularly from a position of strength. LIVE BLOG: Ireland vs Scotland ICC Cricket World Cup 2015 warm-up match

Ireland were set a daunting 297-run target by Scotland, and needed a strong-opening stand in order to set the foundation for victory. That did happen for them, as skipper William Porterfield and Paul Stirling added 57 runs for the first wicket in less than 12 overs. Stirling in particular, was in fine touch as he raced to 37 off 44 deliveries, hitting six boundaries along the way. ICC Cricket World Cup 2015: POINTS TABLE

The introduction of Evans by Scottish skipper Preston Mommsen turned out to be a golden one, as Evans struck in his very first over to remove the dangerous-looking Stirling. He returned two overs later to extend the damage, eliminating Ed Joyce and Niall O’Brien in a space of three deliveries to reduce Ireland to 66 for three.

At this stage, Porterfield would have been expected to play a captain’s knock and pull his side out of the muck that they suddenly found themselves in. That however, was not to happen as he became Evans’ fourth victim of the day when he holed out a catch to Richie Berrington to depart on 23 off 34 balls. Andrew Balbirnie followed him back to the pavilion minutes later after scoring a run-a-ball eight, with Iain Wardlaw joining the wicket-taker’s list. ICC Cricket World Cup 2015: SCHEDULE & MATCH DETAILS

Gary Wilson and Kevin O’Brien managed to stitch a brief 23-run stand for the sixth-wicket, with the former scoring 15 runs off 21 deliveries, including a boundary. He eventually gave Majid Haq his first wicket of the day as Ireland lost the sixth wicket after touching the 100-run mark. Kevin O’Brien and Alex Cusack did not waste time in joining him back in the pavilion, getting dismissed off successive deliveries of the 22nd over bowled by Josh Davey.  ICC Cricket World Cup 2015: Complete Coverage

John Mooney and Max Sorensen could only slightly delay the inevitable, as they added 15 runs for the last wicket, before Majid Haq completed the formalities with two wickets in the 27th over, finishing on figures of three for nine off four overs to complete a major victory for Scotland, who face West Indies in their next warm-up encounter at the Sydney Cricket Ground  on February 12.

Scotland had earlier produced a stellar batting performance, with Matt Machan slamming a 108-ball 103, hitting six fours and four sixes along the way. He was supported by skipper Preston Mommsen (56) and Richie Berrington (52) as they finished on an impressive total of 296 for the loss of six wickets. South Africa-born Max Sorensen was the pick among the bowlers, taking three wickets while conceding 55 runs. 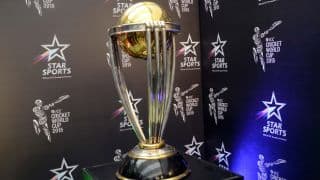