Currently, Ireland are 52 for the loss of two wickets in 10 overs with Niall O’Brien on 22.

Ireland were set a revised target of 181 runs from 24 overs, following another mild rain interruption, during their chase in the only ODI against World Champions Australia at the Civil Service Cricket Club in Belfast on Thursday. Currently, Ireland are 52 for the loss of two wickets in 10 overs with Niall O’Brien on 22 and Ed Joyce on 24. Earlier, Australian skipper, Steven Smith won the toss and elected to bat first, as Australia finished on 222 for the loss of six wickets in 40.2 overs following rain stoppage, while Ireland were set a target of 195 from 27 overs via Duckworth-Lewis method. Australia’s Ashton Agar, Marcus Stoinis and James Pattinson missed out, while George Dockrell, Max Sorensen and Kevin O’Brien missed out for the Irish. Since the match had a delayed start due to rain, the game was reduced to 47 overs per side. LIVE UPDATES: Ireland vs Australia, one-off ODI at Belfast 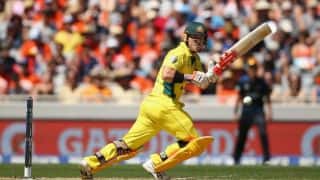 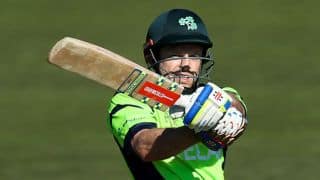