Irfan Pathan cleared the air by saying that he was selected as a batsman for representing the country at the Under-15 level.

New Delhi: Rubbishing the popular perception that former India coach Greg Chappell ruined his career by promoting him as a top order batsman, veteran all-rounder Irfan Pathan cleared the air by saying that he was selected as a batsman for representing the country at the Under-15 level. Irfan, who burst into the national team as a frontline pacer in 2003, said he enjoyed his batting as much as his bowling since his childhood and would not hold anyone responsible for disrupting his India career. “No, Chappell had no hand in hampering my bowling or promoting me more as an all-rounder, who can bat in the top order. A lot of people do not know the fact that I was selected as a batsman among the 30 probables for representing India at the Under-15 level,” the 32-year-old told IANS. ICC Champions Trophy 2017: Mohammed Shami will be the key for India, feels Irfan Pathan

“I actually enjoyed my batting as much as my bowling since my childhood which many people are not aware of. I still get confused when I hear that my career was ruined by someone or the other, but I have been playing cricket for the last 15 years, my career is still going strong.” Irfan, who represents Baroda in the domestic circuit, said he still has five-six years of cricket left in him and is looking forward to the new season to stake his claim once again in the national side.

“It’s a fantastic achievement to play cricket for 15 years. Going ahead, in the future, if any cricketer plays first class cricket for 10 years, I think that will be more than enough. Yes, injuries and bad days are part and parcel of the game,” he said. “If you play at the highest level, there will be more bad days than good. No one can perform each and every day. Who knows what happens tomorrow but at the moment my career is still going strong and I am fit enough to play for another five years.” Irfan, Yusuf launch Cricket Academy of Pathan (CAP)

“Yea, I did change my action and am starting to go back to my original action. Last year has been wonderful, specially the Mustaq Ali trophy went really well. Hopefully, if I keep bowling more, the coming season will be much better,” he added. Commenting on the launch of his latest academy at Lunawada in Gujarat, along with his elder brother Yusuf Pathan, Irfan said the concept behind the ‘Cricket Academy of Pathans’ (CAP) was not only to coach young kids but also the coaches from across the country.

“It was very important for us [me and my brother] to give back something to the game. Whatever we have learnt so far, wherever we have travelled, we have seen the coaching facilities and staff in most parts of the world, we actually felt that we could do much better in terms of coaching the kids and coaching the coaches as well,” he said. Irfan Pathan blames injuries for ruining his career

“What has happened nowadays in most academies is that the coaches come just to make money and there is no agenda of imparting proper cricketing knowledge to the kids. That is how me and my brother came up with the idea of setting up CAP with proper infrastructure where not only the kids but also the coaches get proper coaching.”

“We are planning to open around 15 to 20 academies this year. We have four academies, which are operational at present Port Blair, Raipur, Noida and Lunawada. Two more academies in Sonepat and Surat are coming up next month,” he added. Irfan also gave an insight on PitchVision’s state of the art cricket coaching technology, which will enable his team of experts to monitor and track the overall progress of their cricketers on a day-to-day basis. India strong contenders to win ICC Champions Trophy 2017: Irfan Pathan

It will also provide a comprehensive analysis of every ball played through its unique digital platform www.pitchvision.com . This innovative technology aids coaches and players alike to constantly improve on their game. “PitchVision technology helps to access the progress of each cricketer in any part of the world. Wherever I am in the world, I can keep an eye on the players with this application,” he said.

“This technology has been used by the International Cricket Council (ICC) in Dubai and Cricket South Africa. It is an amazing technology, that’s the reason we have collaborated with this technology in every academy,” Irfan signed off. ICC Champions Trophy 2017: England's Chris Woakes ruled out due to side strain 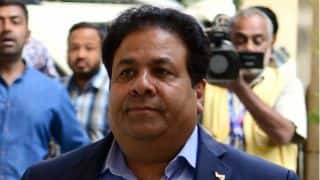